Will the Orlando Magic win another road game?

Orlando owns the league's worst record away from its home arena. Will the Magic's road woes continue into the 2014/15 season?

Share All sharing options for: Will the Orlando Magic win another road game?

Entering Saturday's visit to the SLC to take on the Utah Jazz, the Orlando Magic have dropped their last five road games and 21 of their last 22 overall, with their lone win in that span coming against the Philadelphia 76ers, arguably the league's worst team. With five road games remaining on the Magic's 2013/14 schedule, it's fair to wonder if they'll win another away game before the season runs out. 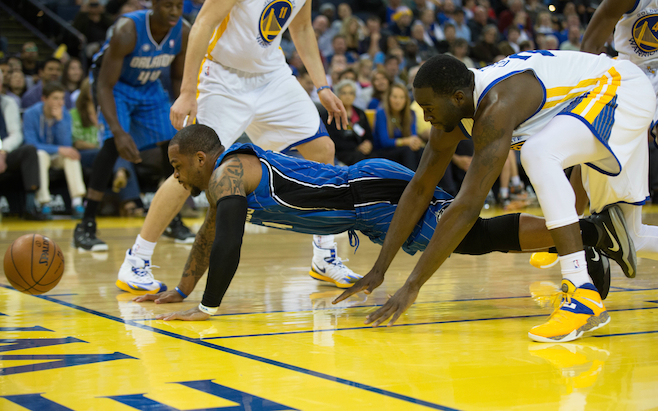 Here's a look at the worst road teams in Orlando history.

They need some good fortune to come their way if they're to avoid becoming the worst road team in Orlando's 25-year history. The 1989/90 expansion club went 6-35 away from the O-Rena, meaning the 2013/14 crew needs to win two of its next five road games to at least tie that franchise-low win total.

James developed log5 to predict win probability for baseball teams. One can apply it in a variety of ways, but for the purposes of this investigation, we'll use two approaches: one that accounts for Orlando's road winning percentage against its opponent's home winning percentage, and another that features the Magic's road efficiency differential relative to their opponents' home one.

The Magic's 4-32 record stands at .111. For each of their remaining home games, we plugged that figure into the log5 formula along with the home winning percentage of that night's opponent. This approach yields dire results for the Magic: they should only be expected to win 0.6 games, but clearly there's no such thing as a partial win, so we have to regard their chances of picking up another road win as a toss-up.

Based on winning percentage, here are Orlando's chances of winning their final five road games of the 2013/14 season.

Should Orlando go winless in its back-to-back against the Jazz and Lakers on Friday and Saturday, then its chances of setting a new franchise record for road utility look strong: the Bobcats, Nets, and Bulls are superior foes with excellent home records which have propelled each into playoff contention. The Magic will be hard pressed to win in any of those teams' venues, with the Nets game looming as the most difficult: based on their road record relative to Brooklyn's home one, the Magic only have a 5.9 percent chance of winning on April 13th.

Analytics have preached the value of scoring differential in the last several seasons, as that statistic reveals more about a team's true ability than simple won-loss record does. Adjusting for pace makes that measurement even more precise, and this approach bodes well for the Magic. While there's no disputing that Orlando's played poorly away from Amway Center, its road efficiency differential of minus-10.3 correlates with that of a team that's won 19.6 percent of its games. Put another way, Orlando ought to own a 7-29 record on the road.

Based on efficiency differential, here are Orlando's chances of winning their final five road games of the 2013/14 season.

The efficiency-differential approach, then, yields more positive results for the Magic than the record one did, though it still demonstrates the prospects of Orlando's picking up another road win look grim.

No matter the approach one uses with it, the log5 method certainly has its limitations: it doesn't account for matchups, injury, or fatigue, for example, which is why it believes, based on both formulae used here, that Orlando stands a better chance of winning in L.A. on the second night of a back-to-back, after travelling from East to West, than it does in Salt Lake City on two days of rest. Indeed, and as we like to remind everyone in these analytic-heavy stories, the teams play on the court, not on paper or in a spreadsheet.

Yet even a less mathematical look at this question would confirm that winning another road game will be a challenge for the Magic, based on the quality of their opposition and how poorly they themselves have played on the road of late. Barring a surprising turn, either by Orlando or by its forthcoming road foes, the Magic appear likely to set the wrong kind of franchise record by season's end.