Magic's Doron Lamb gets his first offensive rebound of the season

The second-year guard snared his own miss in the fourth quarter Saturday.

Share All sharing options for: Magic's Doron Lamb gets his first offensive rebound of the season

Doron Lamb entered the Orlando Magic's game against the Miami Heat on Saturday having played 355 minutes across 33 games without having tallied a single offensive rebound, the most minutes played without such a stat in the 2013/14 season. 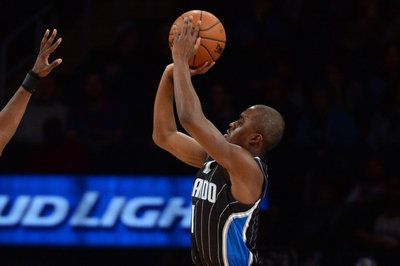 This OPP Mailbag from January dishes on Lamb's potential role with the team.

But at the 3:44 mark of the fourth quarter, with Orlando down 19 to the two-time defending champs, Lamb grabbed his own missed shot to record his first offensive rebound of the year.

A shooting specialist in his second season out of Kentucky, Lamb is averaging three points per game on 38.5 percent shooting from the floor and 36 percent shooting from three-point distance. He went scoreless on 0-of-6 shooting in 15 minutes against Miami. He was coming off one of his finest performances of the season, having tallied 11 points on 2-of-3 shooting in Orlando's victory over the Philadelphia 76ers on Wednesday.