Share All sharing options for: The Orlando Magic's bench needs a rim protector

The Orlando Magic's decision to move Kyle O'Quinn into the starting lineup at power forward has yet to bear fruit: though the second-year big man has posted decent averages in his five starts--to the tune of nine points, 6.2 rebounds, 1.6 assists, and 2.2 blocks--Orlando's yet to come up with a win in those games. 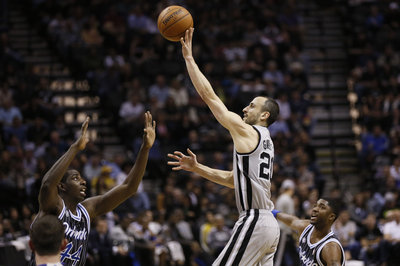 Playing Andrew Nicholson at center has made the Magic's interior defense vulnerable.

As a consequence of pairing O'Quinn with Nik Vučević on the starting frontline, Andrew Nicholson serves as the team's only true big man off the bench on most nights, give or take a Dewayne Dedmon sighting. And while Nicholson has played sparingly since O'Quinn moved to the starting unit--he's logged just 10.6 minutes per game--the Magic's bench group has certainly felt O'Quinn's absence, as Orlando opponents have feasted on it inside due to its lack of a reliable rim protector.

Consider: in the 36 minutes Nicholson has played at center--i.e., without O'Quinn, Vučević, or Dedmon flanking him--Orlando has yielded 120.8 points per 100 possessions and 84.6 percent shooting in the restricted area. We don't mean to suggest that Nicholson's play is the sole reason for the Magic's flammable interior defense--all players have a collective responsibility at that end of the floor, regardless of personnel--but it's certainly played a role.

We should also note that the Magic have defended well with Nicholson on the floor throughout the season: in Nicholson's 58 appearances before O'Quinn's string of starts, Orlando allowed just 98.2 points per 100 possessions on 56.2 percent shooting in the restricted area with Nicholson on the floor. The present issue appears to be that Nicholson is ill-suited to patrol the paint alone. Let's illustrate that point with video from recent games.

On this play, Nicholson and Tobias Harris misplay a screen involving San Antonio Spurs center Boris Diaw. As Kawhi Leonard comes off a Diaw downscreen, Nicholson slides over to cover him. But Harris, possibly anticipating a switch that never came, has fought over the screen, leaving Leonard an open lane to the rim. Diaw hits Leonard in stride, and Orlando has no one at the cup to deny him.

This screen-heavy Spurs set pulls Tiago Splitter, Nicholson's man, away from the rim as a screener and handoff-initiator. The combination of San Antonio's floor spacing and Orlando's own wing-heavy personnel leaves the Magic vulnerable on the interior. As Splitter dives to the rim, Nicholson's still trying to corral Manu Ginóbili as the veteran guard drives to his left. Doron Lamb tries to draw a charge on Splitter as he takes Ginóbili's feed, but he doesn't stand a chance of seriously contesting the shot, picking up a foul for his trouble.

On this Milwaukee Bucks possession, pay attention to Nicholson as he sticks to John Henson on the weak side. Ersan Ilyasova screens for and pitches back to Brandon Knight, who drives to his right. He gets his shoulders past Victor Oladipo and neither Nicholson nor Harris rotates over in time, allowing Knight to scoop the ball in off the glass.

Harris and Nicholson miscommunicate on this Milwaukee play. Watch as Henson, Nicholson's man, moves from the right elbow to the left block to spring Ilyasova, Harris' man, with a screen. Both Harris and Nicholson rotate to Knight at the top of the arc, allowing Ilyasova to dive back to the rim, where Knight finds the Turkish big man with an easy bullet pass. E'Twaun Moore arrives too late to impact the play.

The Bucks exploit Orlando in transition on this play, with an improvised pick-and-pop between Ramon Sessions and Ilyasova providing the catalyst. Ilyasova's screen on Arron Afflalo forces Harris to try containing the speedy veteran. But Harris retreats to Ilyasova at the arc and Nicholson doesn't rotate off Henson on the weak side to cover for his teammate, giving Sessions an uncontested scoring opportunity.

Orlando breaks down comprehensively against the Golden State Warriors in this after-timeout set. Harrison Barnes, stationed in the corner, gets past Afflalo with a single dribble. Harris and Nicholson have their heads turned to cover Draymond Green and David Lee, respectively, and have no chance to cut off the Warriors swingman's drive, resulting in an uncontested one-handed finish.

Having highlighted some of the specific instances of Orlando's defensive breakdowns on the interior, we can now propose some solutions.

The first is to stagger the minutes of Vučević and O'Quinn in such a way that O'Quinn effectively serves as Orlando's backup center as well as its starting power forward. This adjustment would ensure Nicholson won't have to anchor the paint defensively with Orlando's second unit. At 6-foot-10 with only average athleticism, O'Quinn doesn't look like an imposing shot-blocker, but he has terrific defensive instincts and long arms which help him mitigate some of his shortcomings. Perhaps subbing O'Quinn out earlier in games, and replacing him with Harris, would address the problem.

As an aside, reducing the time Harris and Nicholson play together figures to improve Orlando's defense all-around: in the season to date, the Magic have surrendered 111.5 points per 100 possessions in the 156 minutes the two forwards have shared the floor. Refer to the videos above and notice how many of the defensive breakdowns depicted therein involve both players.

Another potential fix, apart from juggling O'Quinn's substitution pattern: making use of Dedmon, the rookie big man whom Orlando signed Monday for the remainder of the 2013/14 season. The USC product has yet to register a block with the Magic, but he's a true seven-footer who averaged 1.7 blocks per game across two collegiate seasons and 2.3 blocks in 15 appearances with the NBA D-League's Santa Cruz Warriors. He has he size, athleticism, and natural ability to develop into an above-average defensive presence from the weak side, and could, with more seasoning, cover for Nicholson's mediocre lateral mobility.

No matter the adjustment coach Jacque Vaughn makes, it's become clear that Nicholson isn't quite ready to defend the five position. I don't intend that comment as a slight against the St. Bonaventure product: team defense is the most difficult concept for NBA players to master, no matter their age, and the adjustment from playing man at power forward to effectively playing full-time zone at center only makes his task more difficult. Down the line, I think Nicholson could defend the position; he's already made great strides as an individual defender by playing more physically and intelligently one-on-one.

But in the present, opposing teams are absolutely shredding Orlando's second unit on the interior. Addressing that serious issue sooner rather than later will go a long way toward ending the Magic's six-game losing streak and enabling them to finish their season on a higher, more hopeful note.