Since taking over in 2012, Orlando general manager Rob Hennigan has assembled a young team with plenty of potential.

The Orlando Magic on Monday re-signed Dewayne Dedmon for the remainder of the 2013/14 season, making the rookie seven-footer the team's ninth player younger than 25 under contract. That signing got me thinking about how Rob Hennigan has constructed Orlando's roster since taking over as general manager in July 2012.

Under Hennigan's tenure, the Magic have jettisoned veterans like Glen Davis and Hedo Türkoğlu in order to open playing time for prospects like Victor Oladipo and Nik Vučević. And though Hennigan has himself acquired his share of veterans--Beno Udrih via trade, Jason Maxiell via free agency--it's also true that those veterans, by and large, haven't played a big role with the Magic.

Here's a look at how the Magic's roster stands, relative to age and NBA experience, after inking Dedmon on Monday. 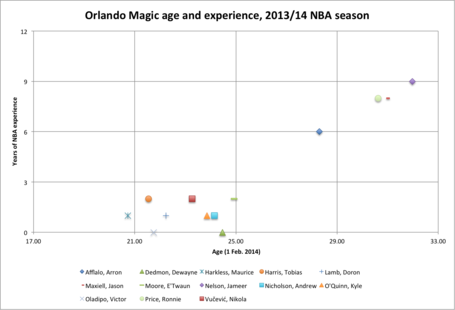 Indeed, only four Orlando players are older than 25 and have more than three years of NBA experience. Of those two, only the starting backcourt of Arron Afflalo and Jameer Nelson log minutes on a regular basis; Maxiell and Ronnie Price provide spot minutes and, more importantly, leadership.

Hennigan's rebuild has prioritized youth over experience since he took over, but the team's play in 2013/14 better reflects that idea: coach Jacque Vaughn allocated 56.8 percent of the team's minutes to players 25 or younger in the 2012/13 season, but that figure stands at 61.6 percent in 2013/14. That percentage will only increase in Orlando's final 15 games with Davis out of the picture.

Having young players on cheap contracts is only one component of rebuilding; developing those players is another one which is significantly more important. It's probably too early to draw meaningful conclusions about any of these players--though Vučević and Oladipo have drawn rave reviews from some NBA analysts--but if nothing else, Hennigan has at least laid a solid foundation on which he can build.