Tyler Lashbrook turns his eyes to the NCAA Tournament in this edition of Ty Tuesday.

Share All sharing options for: Ty Tuesday: Players to watch in the NCAA Tournament play-in games

The NCAA play-in games that run March 18 and March 19 tip off a crazy three weekends of college hoops. This community is, obviously, an Orlando Magic one, but much of the team's future lies in the upcoming draft. For that very reason, we here at Orlando Pinstriped Post should keep a close eye on tournament time as it's a great venue for potential NBA players to showcase their talents.

Typically, the play-in games represent college basketball well, but do so with very few professional prospects. That's not the case this season, as there are at least five potential NBA players participating in this year's play-in games. This Ty Tuesday is here to tell you a little about each of those prospects and what to watch for in those games.

More team coverage: Backing the Pack Banners on the Parkway

If you like watching a guy who can flat-out score, then you'll enjoy watching Warren. He's one of college basketball's premiere scorers and the way he scores is just a joy. He has a weird array of floaters and flip shots, and he's money around the rim. He can get out in transition and push the ball himself or fill a wing off the ball. He can take his man off the dribble and use a beautiful spin move that seemingly comes out of nowhere. In a way, he reminds me of Tobias Harris, but scoring to him looks more fluid than it did for Harris at Tennessee. His shot looks awkward--he brings the ball very low and then brings it over his head before launching--but it works inside the arc. As a freshman, he shot 52 percent from three-point range. That number has dipped with a higher usage rate in his sophomore year, but he's still a capable shooter. At just 20 years old, he's probably a top-20 pick right now. 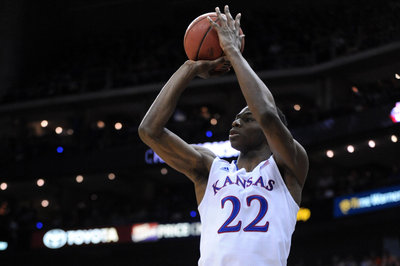 Barber is certainly a project, but he's only a 19-year-old freshman so I thought I'd add him in this space. He's extremely quick, a big leaper, and he has an amazing handle on the ball. His 2-to-1 assist-to-turnover ratio is encouraging and he's averaging nearly six assists per 40 minutes. He can't shoot right now, which is a huge problem, but he can penetrate and has potential. He wouldn't be drafted in 2014, but there's a chance he could be a name down the road.

Christon became a pretty popular name around these parts because he's super athletic, gets up and down the court at hyper-speed, and looks like he can develop into a point guard. As a sophomore, he's played mostly off the ball after playing more as a point guard in his freshman year. But he's only taken a slight dip in assists and his turnover rate is down nearly six percent. Furthermore, he's increased his three-point shooting from a dreadful 25 percent to 38 percent. Still, he only takes 1.4 treys per game, so there's really no telling whether that percentage is maintainable, or just a product of sample size.

Christon is quick and gets to the charity stripe at a fantastic rate (eight per 40 minutes), but the problem is that he's hit just 67 percent of those tries in both seasons at Xavier. He may be better served by staying for a third season and cleaning up his weaknesses.

Marble has improved as a scorer and defender in his senior season, averaging 17.3 points and a bunch of free throws. He's also developed into a reliable jump shooter and is a little better defender than he gets credit for. Even as a senior, he's only 21 years old and will still be 21 during the Draft. Some people have suggested that he could develope into a point guard at the next level, because he does a lot of handling for Iowa and he's comfortable in pick-and-roll situations, but he's not nearly fast enough laterally to defend next-level lead guards.

There might be no college basketball player stronger than Tennesee's Jarnell Stokes. Stokes is a brick house and he's going to beat you up all game. He relentlessly attacks the offensive glass (15.5 percent offensive rebound rate) and he's got a pretty nice touch around the rim, considering his massiveness. He shoots a bunch of free throws (7.5 per 40) and he's developed into an average free throw shooter this season. He is, however, limited by little touch outside of the paint. He has a huge wingspan for his height (7-foot-1) and could probably man up against NBA centers, even though he's a little short for the position. He's so strong and long, though, that he might be able to do it immediately from a reserve spot.

Tennessee's Jordan McRae is built with almost the exact same frame as Jeremy Lamb. McRae is lanky with a seven-foot wingspan and isn't necessarily as smooth as Lamb, but he has deep range and can shoot from anywhere on the floor. He's less reliable as a shooter, but when he catches fire, he's unstoppable as a catch-and-shoot player. He's very athletic and quick and combined with his length, you'd expect him to be a great defender. He's not. He has some upside on that end, but he'll be 23 years old come Draft time and who knows if he'll ever reach his defensive potential. He's a pretty good passer and slasher, but he hasn't developed into a reliable offensive creator. Still, he's super long, really fast, and has a stroke. He'll have a shot--albeit a small one--at an NBA roster.

Here it is, guys: Tournament time! Whether you like college hoops or not, this is a pretty fun three weeks and should give non-college hoops watchers a chance to check out some of the prospects I've been blabbering about for months. Enjoy.