The third-year center is working his way back from a sprained ankle and a concussion.

With his 20-point, 16-rebound effort Wednesday against the Denver Nuggets, Orlando Magic center Nik Vučević extended to eight games his streak of double-doubles, the longest active stretch in the NBA. In that span, the seven-footer is averaging 17.8 points and 13.1 boards on 54.3 percent shooting from the floor. Contrast that level of productivity with his output from his first 40 appearances--13.6 points, 10.7 boards, 50 percent shooting--and it's clear that something has clicked for the third-year big man. What's changed?

"It's me getting back, shape-wise," Vučević said. "Just feeling the game to where I was early in the season. After the concussion and the sprained ankle, I kinda got out of rhythm. So it's just me getting back to 100 percent and just feeling good out there for longer periods."

Vučević sprained his ankle in a December game against the Washington Wizards after he landed on a photographer who was seated along the baseline, an injury he aggravated a short while later. In January, he received a concussion after hitting his head on the floor in a loss to the Los Angeles Clippers.

Health and conditioning explain only a part of Vučević's recent resurgence, however. To hear him tell it, a change in his mental approach has also helped him return to form. 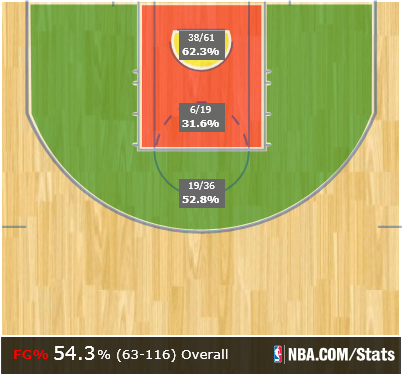 In his last eight games, Nik Vučević has converted from mid-range at an elite level.
Image via NBA.com/stats

"It's just me being aggressive," Vučević said. "Just trying to help my team as much as I can. Obviously, rebounding is something I can do every night by just being the biggest guy on this team. And then with points, the way our offense runs I get a lot of good looks from my teammates. I just try to be aggressive and finish around the rim and making jump shots."

During Vučević's eight-game hot streak, the Montenegrin has converted 52.8 percent of his mid-range shots, according to NBA.com/stats, making him a threat to score even when pulled away from the basket area, where he's remained effective. In his first 40 games, NBA.com/stats data indicate Vučević shot a respectable, but not elite, 42.9 percent on such shots.

So long as Vučević continues to produce consistently and remains in good health, Orlando will find itself in a position to win on most nights. One story to watch over the Magic's final 16 games--in a season that looks inconsequential on paper, given that the playoff chase has long since ended--is how Orlando uses the 23-year-old and what strides he makes.