Denver kept Orlando on its heels for most of Wednesday's game, in which it tallied 120 points.

Share All sharing options for: Magic vs. Nuggets notebook: Orlando gets outworked in fourth straight defeat

The Orlando Magic surrendered a 13-point, first-half lead Wednesday against the Denver Nuggets to drop their fourth straight game, 120-112, at Amway Center. Three Denver players scored 20-plus points as the Nuggets shot 51.1 percent. Kenneth Faried proved the hardest to contain, tallying 26 points and nine boards against a Magic frontline ill-suited to defend him.

With 20 points and 16 rebounds, Nik Vučević recorded his eighth straight double-double, while Arron Afflalo scored 18 of his team-high 24 points after halftime in Orlando's ill-fated comeback bid.

Faried made himself a thorn in Orlando's side for much of the game, but never moreso than in the third quarter, in which he scored 11 points on 5-of-6 shooting from the floor. As the Magic men charged with checking him explained, he's simply a tough cover.

"He's kind of a mismatch. We don't really have anybody that can really match up with him like that," said Vučević. "He's, I wouldn't really say he's undersized, but he's shorter than Kyle [O'Quinn] and he's quicker than him, and he's a little stronger than Tobias [Harris] so it's kind of a mismatch for whoever we put on him. He was good at taking advantage of it, driving to the rim, and we didn't have a response for it."

In addition, Faried has advantages apart from the physical against Orlando, as Harris explained:

"He's one of the most active guys in the NBA. He hustles harder than anybody and he just goes out there and gets it. He's a tough cover." The third-year forward said Faried's energy level makes it difficult for defenders to account for him.

But the Magic's bigs aren't the only players on the team who must shoulder responsibility for allowing Faried's big night: everyone in pinstripes takes some of the blame.

"It's not all on the bigs," point guard Jameer Nelson said. "It's guards helping them as well. Just like when bigs help us when our guys penetrate, we gotta help those guys."

Faried has eclipsed the 26-point mark only twice in the 2013/14 season, most recently against the Los Angeles Lakers on Friday. He wasn't the only Nuggets interior player to post big numbers Wednesday, either: J.J. Hickson posted 20 points and nine boards in 24 bench minutes, and Darrell Arthur added 14 points and two treys in 17 minutes.

Denver's plan throughout proved both simple and effective: it'd push the tempo on Orlando makes and misses, looking to hit one of its bigs in the post after he sealed his defender. If that approach didn't bear fruit, then the Nuggets would implement a pick-and-roll attack to great effect: point guards Ty Lawson and Aaron Brooks tallied 19 assists against four turnovers, meeting little resistance from the Magic.

The Magic must have felt a sense of déjà vu Wednesday as their lead evaporated, as the same dynamic took place in their loss Monday to the Milwaukee Bucks, against which team Orlando lost an 18-point lead.

Superficial differences between the two performances exist: Milwaukee benefitted from playing at home, while Denver had to make its comeback on the parquet floor at Amway Center. Further, the Nuggets aren't nearly as dire as the Bucks. Still, losing two winnable games in such a disappointing fashion didn't sit well with Orlando's players.

"In the past couple of games, we've kinda gotten up early and kinda taken our foot off the gas pedal a little bit," Magic guard Victor Oladipo said. "Just something we have to learn how to do."

"Winning is hard to do unless that's the purpose from everyone every night." Arron Afflalo

Afflalo, now in his seventh season and a veteran of seven NBA Playoffs series, knows from winning. He offered an assessment of Orlando's recent struggles.

"Winning is hard to do unless that's the purpose from everyone every night," Afflalo said. "It's hard to do. We'll get there, we'll continue to grow for the rest of this season, but when winning matters collectively, then I think that's when you hang on to leads, and take pride in having that advantage, stepping on their throat, in a sense, because that win is precious."

Afflalo, an unofficial leader in Orlando's locker room--at coach Jacque Vaughn's direction, the Magic do not have team captains--indicated that he's not "disappointed" in his teammates due to the "realities of our situation," but he would like to see every player perform at a high level, because each has demonstrated that ability at some point in the season.

Orlando made a minor change to its roster Wednesday, activating center Dewayne Dedmon and placing swingman Adonis Thomas on the inactive list. The rookies signed their second 10-day deals with Orlando on March 7th.

Thomas didn't play against Denver. In four appearances, the Memphis product has scored seven points on 3-of-9 shooting in 24 minutes. 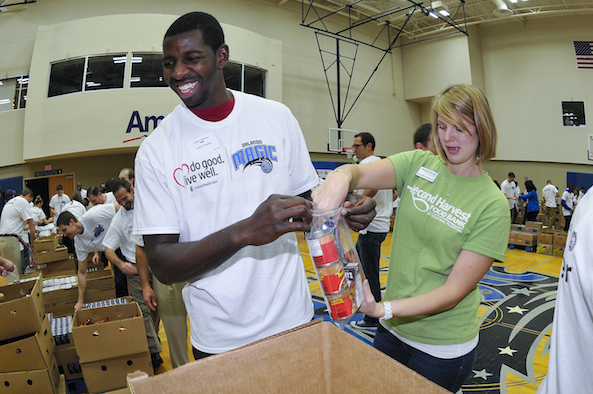 Orlando hosted Hoops for Hunger Night on Wednesday to benefit the Second Harvest Food Bank. The team donated $5 from every ticket sold through a special page on its website to Second Harvest to benefit its Hi-Five Kids Pack Program.

That program aids underprivileged schoolchildren by providing them with meals to take home for the weekend, during which time they don't have access to school cafeterias. On March 6th, Magic forwards Maurice Harkless and Andrew Nicholson joined hundreds of Magic staffers to help assemble 13,500 packs for the program.