By embracing smallball in the second half, the Magic nullified the Pacers' pick-and-roll game and rallied for a one-point win.

Sunday night, for the second time in three days, the Orlando Magic eked out a one-point victory against a conference-leading team. The Indiana Pacers were Orlando's victim Sunday as the home team prevailed by a 93-92 final.

Victor Oladipo scored 13 of his team-high 23 points in the fourth quarter as Orlando's second unit brought the team back from the brink of defeat. "I'm sure glad he's got on a Magic uniform," coach Jacque Vaughn said.

Here's a look at the stories that developed Sunday.

After playing Tobias Harris at small forward exclusively in the first half, Vaughn shifted the third-year player to power forward for stretches of the second, to great effect on both ends of the floor.

According to Vaughn, Indiana's middle pick-and-roll offense gave Orlando a lot of problems in the first half. During intermission, he elected to defend those sets differently by having Harris at power forward, enabling him to switch screens if necessary. "We were able to do some things pick-and-roll-wise that either made them adjust [or] they didn't come off [screens] with clean looks," Vaughn said.

Frank Vogel, Indiana's coach, didn't like how his team responded to Vaughn's new tactic. "Four like-size guys just did a lot of switching," he said. "We didn't attack that very well."

At the offensive end, playing small with Harris at power forward helped Orlando play at a faster pace, given that Harris can handle the ball and initiate offense from the wing off his own defensive rebounds. Harris also spaces the floor well, another consideration of Vaughn's.

And in order to prevent offensive stagnation, Vaughn tweaked his playing rotation to bring Oladipo off the bench more quickly after halftime.

Indiana's middle pick-and-rolls are challenges to defend because of the skill levels of all the players involved, according to Magic big man Nik Vučević. "They got good shooters. A lot of times, when it's Paul George in the pick-and-roll, he's so good at the pull-up, and he can drive, and he can make the pass," Vučević said. "It's hard to defend because you don't know what he's gonna do. And they've got good bigs who can roll to the basket or pop, and you gotta help, and that opens up shots for them."

At halftime, Vaughn said he also stressed the importance of winning the rebounding battle. Orlando did just that in the second half, outboarding its opponent by a 26-20 margin.

There's only so much a coach can do to influence the outcome of a game; ultimately, the players decide who wins and who loses. And on Sunday, no player had a bigger say in the final score than Oladipo, who erupted for 12 points in the opening 5:18 of the fourth quarter to rally Orlando.

"It starts with his energy and his enthusiasm for the game of basketball," Vaughn said. "For a coach, it's extremely gratifying to be around. It doesn't change; he's that way every day. It's really infectious for his teammates. They really wanna play for him and with him."

Magic point guard Jameer Nelson echoed his coach, saying of Oladipo, "he does a great job bringing energy whenever he's in, no matter who he's on the court with."

Oladipo's relentless drives to the rim throughout the game continued to put pressure on the Pacers, even though five of those takes resulted in blocked shots. In that fourth-quarter surge of his, he drilled four jumpers, including a three-pointer, to vary his game and open up the floor.

"He is special. You are going to get nights like this from him." Paul George on Victor Oladipo

"We didn't guard him the way that we are capable of," Indiana big man David West said. "He was getting rhythm pull-ups and got himself going."

"He is special. You are going to get nights like this from him," the two-time All-Star said.

Oladipo credited Vaughn for the victory, praising his coach for having a "competitive edge" that "feeds off on us."

Vaughn praised his team for getting back defensively on George's game-winning try at the end of the fourth quarter, noting that three players contested the shot. A fourth player, Oladipo, hustled to the rim to deflect the rebound away from the board to keep Indiana from tipping it in. After the game, George indicated he thought the Magic fouled him on the play. 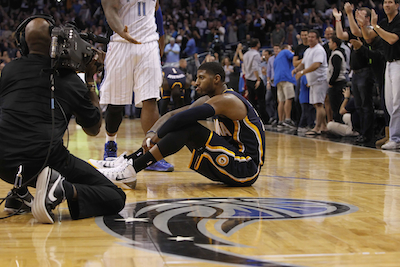 "I thought I got hit," George said. I didn't think I got hit up top, but I felt like Big Baby [Glen Davis] finished through me on the shot. It is what it is."

Davis, as one might imagine, didn't agree with George's assessment of the final play.

"We won. That's all that matters," said Davis, who finished with nine points and five rebounds on the night. "They didn't call the foul and we won." The veteran big man said he knew George would want to take the last shot. "I knew I had to contest some type of way."

After the final buzzer, Davis offered to help George off the floor, but George declined to take his hand. Our own Tyler Lashbrook has a Vine of that exchange.