A terrific finish highlighted Orlando's victory over OKC on Friday.

The Orlando Magic stunned the Oklahoma City Thunder on Friday, 103-102, as Tobias Harris dunked with no time left for the winning points. OKC, which owns the West's best record, entered the game having won 12 of its last 13 games. The victory is Orlando's fourth straight at Amway Center.

"We go in on not the greatest note going into halftime, and for the guys to not hang their heads, make some adjustments, trust the adjustments, and trust each other [was] impressive to see," Magic coach Jacque Vaughn said. Orlando outscored the Thunder in the second half, 52-37, for the victory.

Breaking down the final sequence

Vaughn praised Harris for his "competitive spirit" in trailing the final play, but Harris himself said he was "a little bit" surprised that Maurice Harkless passed the ball back to him instead of shooting it himself. "I was about ready to congratulate Moe for making the layup," Harris said, "but he kicked it to me. I was happy it went in and it all worked out for us."

"I passed it to Moe and I thought he was going to shoot. Then he throws it back. I'm like, 'Who is he throwing it to?!'" Victor Oladipo on the Magic's game-winning play

Victor Oladipo, who came up with the loose ball that led to Harkless' game-winning assist, also expressed surprise that the second-year forward didn't take the shot himself.

"I passed it to Moe and I thought he was going to shoot," Oladipo said. "Then he throws it back. I'm like, 'Who is he throwing it to?!'"

Harkless offered two explanations for his decision to pass. For one, he thought there was more time remaining--about three to five seconds--than there was. For another, his momentum was carrying him "behind the backboard," so he would not have had a clean look at the basket.

The play, as one might imagine, fired up the team and the crowd. Before hitting the showers, two players gathered around a Magic staffer's laptop to watch the replay from several different angles, with one of them wondering aloud why Thunder swingman Jeremy Lamb didn't foul Oladipo as soon as he corralled the loose ball. Had Lamb taken the foul, Oladipo would have needed to make a foul shot to force overtime or two to take the lead, and OKC would have had possession with a few seconds remaining.

Durant scored 29 points to lead all players, but he missed the shot that Oladipo rebounded to ignite the final sequence. After a 15-point first quarter, Durant shot 5-of-15 for 14 points the rest of the way.

After falling behind by as much as 17 in the first half, Orlando fought its way back into the game with its defense.

"We came into halftime and we watched some film and we talked about how we could help ourselves," Vaughn said. "There were numerous possessions in the first half where we could have been in better situations, better placement, [and] could have helped each other a little bit more, and we did that in the second half. That was the difference."

Magic swingman Arron Afflalo agreed with his coach. "Our rotations weren't as tight as they needed to be in the first half and we came in at halftime and made that adjustment," he said.

The Thunder shot 41.7 percent in the second half, with nine turnovers leading to 16 Magic points, so the changes Orlando made in the locker room worked.

Orlando's defense didn't phase Durant, however. "I just missed shots," the league's leading scorer said. "I got to wherever I wanted to go. I just have to finish."

Orlando paid tribute to not one, not two, but three key figures in its history between the first and second quarters Friday. In the brief ceremony, Sam Vincent, Jeff Turner, and John Gabriel--all of whom joined the team prior to its inaugural season in 1989/1990--received framed photos commemorating the team's 25th anniversary season. Vincent and Turner played on the expansion team, while Gabriel worked in its front office and eventually took over as the team's general manager, a post he held for five seasons.

All three men met with the media before the game; look for details of our talk with Gabriel on Orlando Pinstriped Post in the days ahead. We'd be remiss if we didn't note here, however, that Gabriel, who learned three years ago he suffers from Parkinson's disease, is still working as the New York Knicks' Director of Pro Scouting.

"But now I'm to the point where I'm still working and still trying to be useful, but still turning my attention to the National Parkinson's Foundation and trying to help others by raising money and raising awareness," Gabriel said. 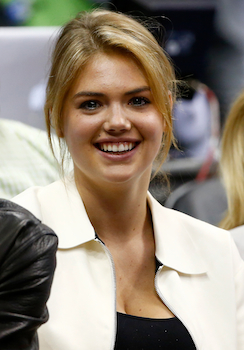 Detroit Tigers ace Justin Verlander attended Friday's game along with model and actress Kate Upton, his girlfriend. The pair sat along the baseline closest to the Thunder's bench. When the Magic's game operations crew showed Verlander on the MagicVision, they blasted KISS' 1976 hit "Detroit Rock City."

Later in the game, Upton got up and danced during a "Dance Cam" segment on the MagicVision. The fun continued in the second half when Stuff, the Magic mascot, proposed to Upton while Verlander was away from his seat.

Before Harris' heroics, Magic season ticketholder Dr. William Dunn provided an exciting finish of his own. During a second-quarter timeout, the Magic invited him onto the floor for a chance to win $10,000. To do so, he'd have to make a layup, a free throw, and a three-pointer within a 30-second span.

Dr. Dunn nailed the layup and drained the free throw on his third try. With just three seconds remaining after he made the foul shot, he had to hustle to the top of the arc to get off the prize-winning shot.

Dr. Dunn's triple-try found the bottom of the net as the horn sounded, bringing many of the fans in attendance to their feet. After a video review, Orlando deemed that he released the shot in time. In a brief interview with in-arena host DMC, Dr. Dunn said he planned "to pay for the adoption."

After Dr. Dunn's big shot, the conversation on media row turned to whether or not any play for the rest of the game, or the season, could possibly top his shot.

As it turns out, that discussion was premature.