In January, Orlando's Oladipo put together the finest month of his rookie season, but he couldn't capture his second straight Eastern Conference Rookie of the Month award. 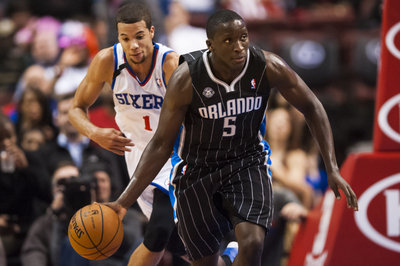 An SI scribe says the Magic would likely choose Carter-Williams over Oladipo if they had a mulligan on the 2013 Draft.

Oladipo averaged 15.6 points, 4.9 rebounds, 4.3 assists, and 1.6 steals in 17 January appearances, including 13 starts. With a True Shooting mark of 53.5 percent, he scored more efficiently than ever. However, many of Carter-Williams' per-game numbers--16.5 points, 5.6 rebounds, 5.6 assists--trumped Oladipo's, though his 46.6 percent True Shooting indicates the Syracuse product could stand to improve offensively.

Regardless of the award's January winner, the real news is that Oladipo has made real strides as the season's worn on; he's shown no signs of hitting the so-called rookie wall. Tyler Lashbrook went into greater detail regarding Oladipo's brilliant January in a recent Ty Tuesday column.

As of Wednesday night, Oladipo still kept his December Rookie of the Month award in his locker at Amway Center.