NBA Draft 2014: Joel Embiid might stay for sophomore season, according to report

The freshman center might stay another season at Kansas to hone his game before making the leap to the pros.

Share All sharing options for: NBA Draft 2014: Joel Embiid might stay for sophomore season, according to report

Kansas center Joel Embiid has seen his NBA Draft stock spike in his freshman season at Kansas, making him one of the most highly touted prospects in 2014. But as he told ESPN's Jeff Goodman on Tuesday, it's not a cinch that he'll make the jump to the NBA. 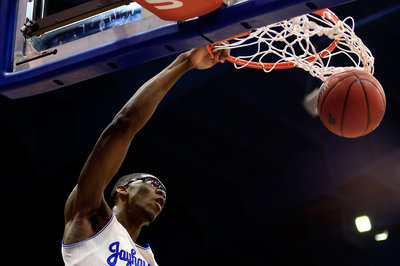 Tyler Lashbrook assesses how the Cameroonian center might fit in with the Magic.

"I'll make a decision after the season, but I'm definitely considering coming back to school," Embiid said, according to Goodman.

Embiid's combination of size, athleticism, and defensive potential at such a young age has wowed scouts and could make him the first overall pick in the Draft. In one recent mock, the Orlando Magic selected him second.

Even if Embiid stays at Kansas, the Draft will still boast plenty of potential stars at the top. Orlando, which through Tuesday's games owns the league's second-worst record, will have a solid chance of landing such a foundational player regardless of Embiid's decision.