Orlando stands to benefit from the losses mounting in Denver and New York.

As part of the four-team trade in which the Orlando Magic unloaded Dwight Howard, they'll receive a first-round pick in the 2014 NBA Draft from either the Denver Nuggets or the New York Knicks, whichever first-rounder from those two teams is less favorable; at Orlando Pinstriped Post, we call that pick the WoNK. And in recent days, the chances of the WoNK landing in the lottery have significantly increased. 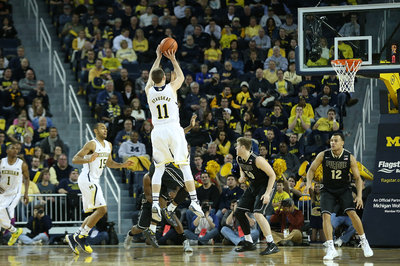 Tyler Lashbrook profiles seven players, including Michigan guard Nik Stauskas, who may be available with the WoNK selection.

Both the Nuggets and the Knicks lost on Thursday night, with New York suffering a 26-point defeat against the Miami Heat and Denver falling by 23 points to the Brooklyn Nets at home. As a result, both teams own four-game losing streaks, tied for the third-longest skid in the NBA.

Meanwhile, even after winning Wednesday night, the Magic own the league's third-worst record. Were the lottery held Friday, Orlando would have assured at least a top-six selection in the Draft with its own pick. It'd also receive the Nuggets' pick at 12th overall.

Magic fans will certainly have their eyes on the standings as the season draws to a close. Based on Thursday's results, they must like what they see.