In NBA prospects, what do scouts value? Why are some players better suited for college ball than the NBA? Tyler Lashbrook breaks it down in this Mailbag.

Happy Saturday, community! I hope you guys are enjoying your weekend festivities. We're going to keep the Orlando Magic coverage rolling with another Mailbag. As a reminder: if you have any questions for me or Evan Dunlap, you can submit them to OPPMailbag@gmail.com or on the Orlando Pinstriped Post Facebook page.

Anyway, we're reaching into the Mailbag and pulling out a very good question about NBA Draft prospects, scouts, and how the process of evaluating players actually works. With that said, let's get it.

Based on how the season is going for Orlando--not too shocking--all of its fans are, well, obsessed with anything draft related. So, of course, when mock drafts are released, everyone chimes in on who they feel is the best prospect and why. So, my question for you is what do NBA scouts look for in prospects? What is it that translates into the NBA game the best? And, what do they mean when analysts state, "his game is more suited for the NBA than in college?"

The truth is, there isn't an exact science in scouting. There is no formula that you can plug in and say, "Player A will make it over Player B because blah blah blah." It's more abstract than that; there's some art to it. Scouts don't nail every player they evaluate because that's just impossible. Not every college athlete becomes a professional and not every athlete who becomes a professional works out. Still, there are--and this moves us into answering your question--some factors that I think every person who watches college basketball players looks for in prospects.

Let's begin with the raw aspects: height, width, length (wingspan and standing reach), straight-ahead speed, lateral quickness and jumping ability. These numbers, while having practically nothing to do with basketball, construct a player's potential. The initial scouting process usually begins with analyzing a prospect's size and corresponding athleticism, because that's the first thing you see when you look at an athlete.

Length is probably the most important aspect here. Take Kyle O'Quinn for example. He isn't a great athlete by any stretch of the imagination and he mostly plays below the rim. However, his mammoth, 7-foot-4 wingspan masks whatever speed and agility limitations he has. If his wingspan were five inches shorter, he may not be an NBA player. But his arms are so long that he can defend quicker opponents, contest their shots, and finish the play by extending his limbs and grabbing the rebound.

Compare that to Blake Griffin and Julius Randle, who are both stuck with 6-foot-11 wingspans. Griffin has blasted past this limitation because he's a freakish athlete with incredible ballhandling skills, great vision, and an improving jump shot. But he'll likely never be an above-average defender and as such he'll never be able to man the paint on defense because he doesn't have the necessary length to do so. Randle is in the same boat, though he doesn't jump nearly as high as Griffin.

The faster a prospect is, the higher he can jump, and the longer his wingspan suggests the extent to which he can improve because he isn't limited physically. Most people believe that a hard-working guy who is blessed with world-class athletic abilities will polish his edges over time when he is surrounded by some of the world's best coaches. That's essentially how a max is formed to a player's potential.

Aside from raw measurements, scouts look for skills that will translate at both levels: shooting, rebounding, and shot-blocking. Shooting translates the most: if a guy can knock down an open jumper, he should theoretically be able to knock that open shot down at any level of basketball. Rebounding is a uniquely inherent skill derived from instincts and motor; those instincts don't just leave a prospect from one level to the next. Blocking shots involves instincts and athletic ability and it seems that most prolific shot-blockers in college bring at least that skill with them to the pros, even if that doesn't necessarily mean the prospect is a positive on the defensive end. 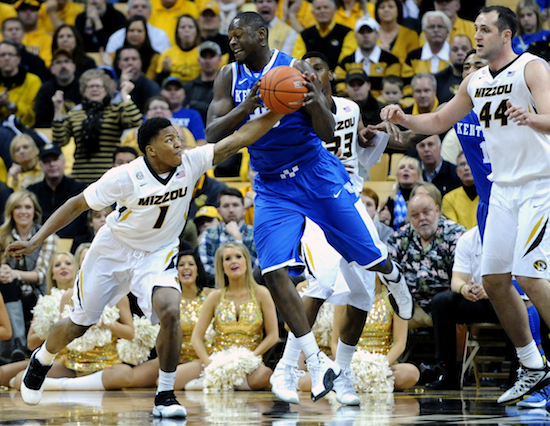 There isn't a whole lot of floor spacing at the college level: The three-point line is shorter, there is no defensive three-second rule, and there are generally fewer knock-down shooters. Basically, the floor is condensed and compacted that there's little space with which to operate.

For instance: when Randle touches the ball on the low block, he's often double-teamed, or the help-side defense sinks off so far that there are three defenders within striking distance of him. In the NBA, however, much better shooters will surround him and he won't have to worry about facing triple-teams. In this sense, he is better suited for the NBA where he can benefit from better floor spacing.

I hope this helps answer your question, Ryan.