Ty Tuesday: Evaluating the Magic and looking ahead to the rest of the season

In this week's Ty Tuesday, Tyler Lashbrook looks at where Orlando stands at the unofficial midpoint of the season and previews some key stories that could play out over its final 28 games.

Share All sharing options for: Ty Tuesday: Evaluating the Magic and looking ahead to the rest of the season

How's it going, folks? I hope you enjoyed the All-Star weekend, though I totally understand if you didn't. The dunk contest ended abruptly right when it was starting to heat up and the game itself was a bit anti-climatic toward the end. But, hey, Arne Duncan paced the Celebrity Game like it was the 1991 Ivy League Championship, Victor Oladipo was 0.1 seconds away from winning the Skills Challenge--thanks a lot, Michael Carter-Williams--and Marco Belinelli won the Three-Point Shootout.

But now we're back to the regular-season grind and there's two months of actual basketball left to be played. Let's use this space to review some of the emerging Magic storylines from before the break talk about what we should keep an eye on through the last portion of the season.

I'm not sure Magic fans appreciate Arron Afflalo as much as they should. The type of transformation the veteran guard went through--from third or fourth option to legitimate, go-to scorer--is one that most players begin making early in their career; Afflalo made that change between his sixth and seventh NBA seasons. It's a testament to his work ethic and his willingness to accept challenges head on.

It's also a testament to Rob Hennigan's ability as a talent evaluator. What other general manager saw Afflalo's potential as a first option on offense? He was never asked to be one with the Detroit Pistons and he didn't really fulfill that role with the Denver Nuggets until a few injuries forced him into that role late in his tenure. Still, Hennigan saw something--as vague as that sounds--that told him that Afflalo could become the linchpin of the massive trade that unloaded Dwight Howard. That's forward-thinking talent evaluation.

Carter-Williams will likely take home Rookie of the Year honors because of some gaudy stats. But those raw numbers mask an inefficiency--especially in January and February--that is hurting Philadelphia on the offensive end: his True Shooting is over eight ticks below league average and his three-point percentage has bottomed out to 27 percent in that span. He has rebounding and raw scoring ability, but Philadelphia relies on him for a large load of its scoring, so one should expect those sorts of numbers.

Oladipo, meanwhile, has solved some of his early turnover issues and he's shooting 33 percent from long range in 2014. He registered an above-average True Shooting figure (53.5) through 17 games in January and he's finding more efficient ways to score in the halfcourt as his rookie year moves on, even though his True Shooting has sunk a bit in February. He's also using pick-and-rolls on nearly 10 percent more of the time than Carter-Williams, while scoring 0.2 points more per play.

To be fair, however, Carter-Williams is playing with less talent than Oladipo. The only proven NBA players alongside the Sixers' rookie are Thaddeus Young, Spencer Hawes, Evan Turner and sometimes Tony Wroten. Oladipo, meanwhile, plays with several guys who have or will carve out long-term NBA careers. Playing basketball with better players makes you a better basketball player and that's something Oladipo has as an advantage over Carter-Williams. 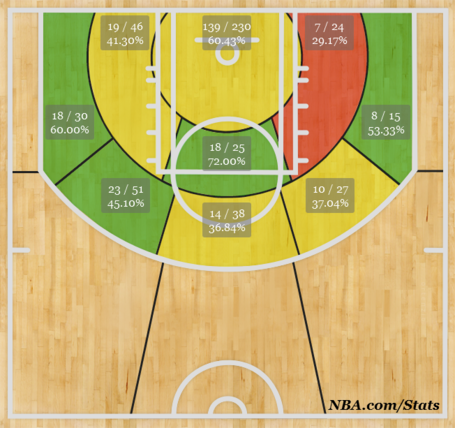 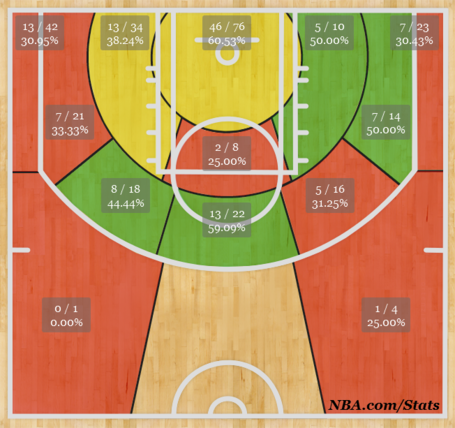 There were expectations, on this end, at least, that Andrew Nicholson would emerge in his second year. So far, that hasn't happened. The young power forward from St. Bonaventure has almost entirely fallen out of the Magic's rotation and has been relegated as a last-ditch option off the bench. His field goal percentage has dropped to 43.9 percent, down nearly nine percentage points from last season, and some of that has to do with where he's getting his shots.

I had hoped that Nicholson's expanding his range to the three-point line would open up his offensive game and, in turn, space an Orlando offense that is so often cramped. Thus far, the Nicholson three-point experiment has failed. He often looks lost on the offensive end as it sometimes appear as though he forces himself to camp out behind the arc as opposed to comfortably slipping to long range in the flow of the offense.

There's still faith here, though. Nicholson has a feathery soft touch, is deadly just inside the arc, shoots 80 percent from the line, and shot 44 percent from deep in his final season at St. Bonaventure. He has the tools to become a capable long-range shooter, but that process is taking a little longer than expected.

Playing time is really what Nicholson needs to get something going. In the first two months of the season, he averaged over 19 minutes per game and put up efficiency numbers that were well above league average. In January and February, however, he's averaging fewer than 10 minutes a night and his True Shooting has plummeted below 40, well below league average. Nicholson appears to be a guy who needs minutes to find his rhythm: take them away and his efficiency goes out the window too. The problem is finding playing time among a crowded frontcourt. We'll address this subject later.

Orlando, on the surface, seems like a prime team to make a splash at the trade deadline: the team has a borderline All-Star on a manageable contract (Afflalo); a solid veteran floor general (Jameer Nelson); a big man who would serve better as the third or fourth big in a playoff contending frontcourt rotation (Glen Davis); and a crew of young, talented players that it could package for a proven player. Still, all reports indicate that the Magic are remaining quiet and that fans shouldn't be surprised if the team paces the remainder of the season with its current roster.

I'm convinced that Orlando will not make a trade before Thursday's deadline. One of Hennigan's first moves as general manager was re-signing Nelson, rewarding loyalty and leadership with financial gain. Nelson, from all indications, loves the city of Orlando and reportedly wants to retire as a member of the Magic. I understand that the NBA is a business, but there's something honorable in rewarding with job security someone who has provided as much as Nelson has. I'd be shocked if the Magic traded him, unless a team flipped him for a first-round pick, which seems unlikely given Nelson's age and remaining skill set.

An Afflalo deal seems unlikely at this stage, too, unless a team is willing to part with a high pick in this year's Draft or a star player who would immediately speed up the rebuild. Picks are tough to trade for this season and it's hard to imagine any scenario in which Hennigan drops the rebuild plans this early into the process. Davis is a possibility, but he's a bit pricey for his ability and there aren't a lot of teams that can provide Orlando with any good return. The most likely scenario there is that the Magic trade Davis for an expensive expiring contract, but even that scenario seems improbable unless Orlando packages one of its young pieces with Davis.

The Magic set the bar for winning when they beat the Oklahoma City Thunder and the Indiana Pacers two weekends ago. Two last-minute, borderline fluke wins against two of the NBA's best teams don't signal an immediate turnaround. Remember, after those two big wins Orlando faltered to a loss against a Mike Conley-less Memphis Grizzlies team. Still, Orlando proved it has the ability to play against anyone.

In the 2013/14 season, the team finished just 5-24 after the All-Star Break. Barring injury, it's tough to imagine the Magic finishing out the 2013/14 season that badly, especially with their relatively easy remaining schedule. Only 10 of their remaining 28 games are against winning teams, so there's a good chance they could end up around or just below .500.

3. Figuring out the future roster

Kyle O'Quinn, Doron Lamb, E'Twaun Moore, Ronnie Price and Jason Maxiell will be fighting, almost literally, for their very NBA lives in this last stretch of the schedule. None of those five guys has a guaranteed roster spot for the 2014/15 season and each has dealt with sporadic playing time over the past month.

One can imagine that Price and Maxiell will not receive much playing time as the Magic will likely turn to their young guys in order to see just what they can provide. If Orlando plans to keep either of 2013's veteran free agent signings, then it will likely be based off leadership and locker-room merits rather than what either can provide on the floor.

O'Quinn has basically proven himself as a versatile, two-way NBA big man. He'll likely never start, but he's done enough to warrant a contract, either from Orlando or elsewhere. His playing time has increased as the season has progressed and he's rewarded the Magic with very handy minutes.

The Lamb-Moore battle is actually a fun subplot to the end of the season. Lamb has outplayed Moore as of late, but Moore has been the beneficiary of more consistent minutes. The fun part here is that both play very similar roles and are seemingly battling each other for minutes on a daily basis. Neither may make Orlando's roster next season, but whoever plays better in this late stretch likely has the upper hand.