NBA All-Star 2014: Which Magic player has a better chance of winning Saturday?

Orlando has two representatives in All-Star Saturday events. Vote for which one you think stands a better chance of bringing some hardware back to the City Beautiful.

Share All sharing options for: NBA All-Star 2014: Which Magic player has a better chance of winning Saturday?

Orlando Magic guards Arron Afflalo and Victor Oladipo will represent their team and the Eastern Conference as a whole in two separate All-Star Saturday events: Afflalo will take part in the Three-Point Contest just after Oladipo teams with Michael Carter-Williams in the Skills Challenge.

In light of Orlando's representation in Saturday's competitions, I offer this question: Which player do you think has the best chance of winning his respective event? 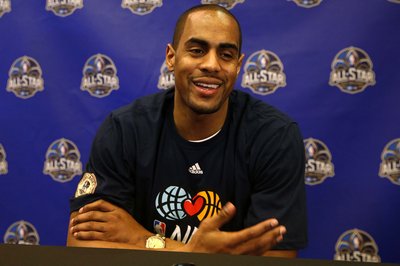 Details on all the All-Star Saturday competitions, including rules and who's taking part in which events.

Afflalo has developed into one of the league's top three-point shooters, converting 42.5 percent of his three-point attempts and making 1.9 threes per game. He'll face stiff competition from the likes of Stephen Curry, Bradley Beal, and 2012 Three-Point champ Kevin Love, and four others.

There's no question that Oladipo will navigate the dribbling parts of the Skills Challenge with great speed, but his success in the competition hingest upon his ability to convert the passing and shooting challenges. If he nails the top-of-the-key jumper within his first two attempts, he stands a solid chance of advancing to the second round.

All-Star Saturday opens at 8:30 PM Eastern on TNT with the Shooting Stars competition.

What do you think of Orlando's chances on All-Star Saturday, Orlando Pinstriped Post readers? Please vote in the poll embedded within this post.