The Magic swingman said Wednesday he's received no indication that Orlando wants to trade him before the February 20th deadline.

Scoring isn't the only category in which Arron Afflalo leads the Orlando Magic: no Magic player has been mentioned in more trade rumors in the lead-up to the NBA trade deadline, set for Thursday, February 20th. Afflalo said following Wednesday's loss to the Memphis Grizzlies that he's unaware of any potential trades involving him. 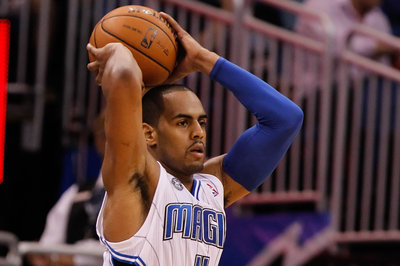 Multiple reports indicate Orlando doesn't have anything brewing in advance of the trade deadline.

"Obviously, now that it's approaching, management hasn't approached me with anything in particular," Afflalo said.

Afflalo has other topics with which to occupy his mind. He's off to New Orleans to take part in the Three-Point Contest for All-Star Saturday, and then the Magic open their post-All-Star schedule with back-to-back road games against the Milwaukee Bucks and Cleveland Cavaliers. The trade deadline follows the latter contest.

In 50 appearances, Afflalo is averaging 19.4 points, 4.1 rebounds, and 3.7 assists for the Magic. His career-best production, veteran pedigree, and affordable contract make him an attractive trade target as the deadline nears, but for now all indications point toward Orlando's having a quiet trade deadline.