The Starters: Magic a "Winner of the Weekend"

Orlando's victories over Indiana and Oklahoma City made The Starters take notice.

Share All sharing options for: The Starters: Magic a "Winner of the Weekend"

After their dramatic, come-from-behind upsets of the Oklahoma City Thunder and Indiana Pacers over the weekend, the Orlando Magic earned some national recognition from The Starters, who named them one of the "Winners of the Weekend on Monday's show, which episode is available on NBA.com and for free in the iTunes podcast catalog.

In Orlando, signs of progress 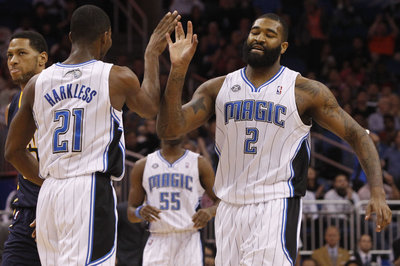 The Magic's recent victories over Oklahoma City and Indiana suggest the club might be on the right track in its rebuild.

"It's been a long season for them and they're gonna have a lot of changes in the offseason as well but you have to look at them right now and think this is what you want to see," Leigh Ellis said. "A team just fighting for its life still, not just deciding, 'we're gonna throw it in and hope we get a high Draft pick.'"

J.E. Skeets singled out the play of Victor Oladipo for bringing the Magic back Sunday against Indiana. "I loved Oladipo in that game yesterday," he said of the Magic rookie, who led Orlando with 23 points against the East's best team. The Indiana product scored 13 of his points in the fourth quarter.

"He's an emotional guy," said Ellis of Orlando's prized rookie. "We've seen it this year. When he gets hot, he's just feeling it. It's going to be interesting to see how that develops over his next few seasons: is he gonna become Irrational Confidence Guy or is he gonna become more cash down the stretch?"

The Starters airs weekdays on NBA TV at 6 PM Eastern.