Share All sharing options for: Clippers 114, Magic 86: Orlando trails from wire to wire

The Los Angeles Clippers blasted the Orlando Magic on Wednesday for the second time in as many weeks, winning by a 114-86 final. The visiting Magic, in the midst of a six-game roadtrip, never led in the game as L.A. picked up its sixth consecutive victory.

Chris Paul, Blake Griffin, and J.J. Redick all stood out for L.A.: Paul tallied 19 points, five rebounds, and 10 assists in just 29 minutes, while Griffin led all scorers with 21. Redick, meanwhile, torched his former club with 20 points on 7-of-11 shooting, with four treys. 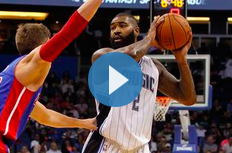 The Clippers' superior talent level and crisp execution helped them build a lead as large as 15 points in the first period, but Orlando got almost all of that lead back in the second as Doc Rivers rested his starters. Ben Gordon cut the Clippers' lead to three points with 7:01 to go in the half, prompting Rivers to re-insert Paul, Griffin, and Redick less than a minute later.

Seconds of game-time later, Kyle O'Quinn earned an ejection for flagrantly fouling Griffin. Orlando, already shorthanded on the front line with Nik Vučević sidelined, had no real interior presence on either end of the floor after O'Quinn's dismissal, and it showed: for the game, the Clippers held a 44-34 advantage on the glass and a 10-2 edge in second-chance points.

With O'Quinn out, Jacque Vaughn started Elfrid Payton at point guard in the second half and moved Channing Frye to center. That move didn't pay off, though in fairness to Vaughn his only other option would have been to start Dewayne Dedmon. Just over halfway into the period, L.A. had increased its lead from 13 at intermission to 21, with Paul's sudden trigger-happiness helping create separation.

At the other end, Orlando couldn't seem to get anything organized: its motion sets yielded precious few open looks, and DeAndre Jordan's presence at the rim deterred would-be drivers from attacking.

The rout continued into the fourth as Vaughn and Rivers emptied their benches. Luke Ridnour, Maurice Harkless, and Andrew Nicholson got extended playing time, but didn't exactly make the most of it. Indeed, one can argue that no Magic player performed more admirably than Dedmon: with his mother in attendance, the USC product set a new career-best with nine points to go with eight boards.

Magic at Clippers: Orlando takes on L.A. in rematch