Orlando isn't satisfied with coming up short against the league's hottest team, as it did Tuesday.

Share All sharing options for: Orlando Magic want real wins, not moral ones

The Orlando Magic's crushing, one-point loss to the Golden State Warriors on Tuesday, in which they led by as much as nine in the fourth quarter before Stephen Curry and Klay Thompson caught fire from beyond the arc, has the team feeling frustrated like no other defeat in recent team history, says Josh Robbins of the Orlando Sentinel.

Magic lose heartbreaker in the Bay 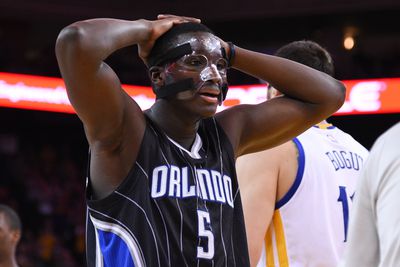 "Of all the losses the Magic have suffered the last three years, this one may have been the toughest for them to stomach," he wrote after visiting the Magic's locker room. "It was tough for them to stomach because of how well they played and how close they came to that win."

Indeed, the Magic had several reasons to feel okay despite losing. On the road, missing their best player, and facing the league's hottest team, they had plenty of factors working against them. And yet a three-pointer from a future Hall-of-Famer with just 2.2 seconds remaining was all that separated the Magic from victory.

As Robbins says, Orlando's dissatisfaction with Tuesday's result bodes well for it going forward. Having players invested in outcomes--the product, not simply the process--will go a long way toward creating a culture that values winning, not simply competing or doing one's best. Such an environment will help the team once its rebuilding plan really gets underway, which is to say once it acquires the superstar-level player it so desperately needs.

Magic at Warriors: Orlando takes on a title contender