The analyst David Thorpe has found things to like in the rookie point guard's game, but says he must become a better shooter.

In a look at NBA rookies playing big roles for their teams in the season's early going, ESPN Insider analyst offers words of praise for Orlando Magic point guard Elfrid Payton, particularly his playmaking. "There are times to make quick passes and times to wait just a second more, allowing a teammate to get into a better scoring position," says Thorpe. "Payton has shown some talent in this area." 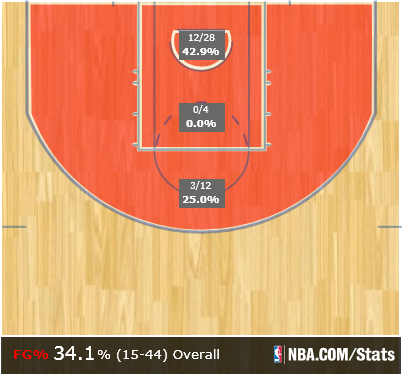 But under the heading "something to work on," Thorpe draws an unsurprising conclusion: Payton must improve as an outside shooter.

"Many rookies have to improve their decision-making and shooting mechanics," according to Thorpe. "Payton appears to have a handle on when to shoot; it's just that he is simply a bad shooter."

No one would dispute that last claim: through five games, Payton has converted on just 34.1 percent of his shot attempts, despite rarely attempting shots outside the immediate basket area.

Thorpe's point about shot-selection merits note, however: as he says, plenty of young players post poor shooting percentages because they take poor shots. That Payton already recognizes a good shot bodes well for his future.

Another area of concern for Payton here: his tendency to get his shot blocked. Opponents have rejected 13 of Payton's shot attempts, nearly equalling the number of shots he's made (15).