Orlando, though not setting the league aflame by any means, continues to defy expectations.

The Orlando Magic entered Monday's night of NBA action with a 6-9 record and in the playoff hunt, albeit in a comically weak conference. Their play to date prompted SB Nation NBA analyst Drew Garrison to lift them to 18th in his NBA power rankings, up from 21st the previous week. 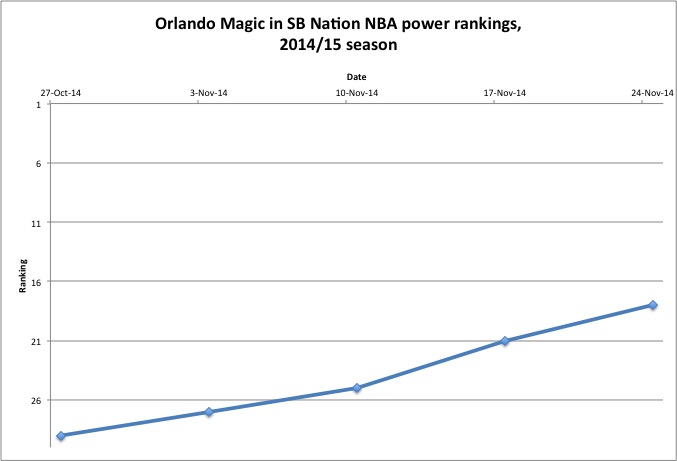 Orlando has improved in SB Nation's NBA power rankings every week of the 2014/15 season to date.

Indeed, Orlando has risen in Garrison's rankings each week. As he notes, "the Magic aren't winning consistently, but they're still one of the tougher outings among bad teams." Even after Monday's 32-point drubbing against the Cleveland Cavaliers, Orlando ranks 24th in point differential. Further, its 4-2 record against teams below .500 indicates it's remaining competitive against the league's other bottom-tier teams, an improvement over a 2013/14 season in which they went 9-32 against such squads.

Orlando's looked, if not good, then certainly better than expected on the young season. Its fortunes might change in the coming weeks, however: Friday marks the start of a six-game, eight-day roadtrip featuring two sets of back-to-backs. If a strained calf continues to limit or rule out Tobias Harris, the team's second-leading scorer, for some or all of those games, then the Magic's record will certainly get worse before it gets better.

The league's bottom five teams, according to Garrison: the Minnesota Timberwolves; the Stan Van Gundy-led Detroit Pistons; the Los Angeles Lakers; the Oklahoma City Thunder; and the Philadelphia 76ers.