Orlando's young big man is turning heads with his strong play to date.

Nikola Vučević tallied another milestone in his young career Saturday, setting a new career-high in scoring with 33 points as his Orlando Magic fell to the Miami Heat, 99-92. The game was the latest strong effort from the fourth-year pro, who's gaining attention around the league for his play to date.

Man in the middle 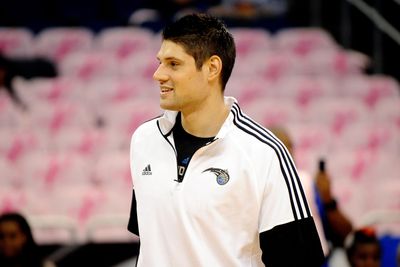 Here's a closer look at where Vučević stands in the league-wide landscape through Saturday's games.

But Spoelstra isn't the only coach to heap praise upon Orlando's 24-year-old seven-footer: he became the third NBA coach in the last week to make such comments.

"Vučević is an All-Star," Los Angeles Clippers coach Doc Rivers said Wednesday, again according to Robbins. "He's a terrific player. He's probably the best player in the league that nobody knows. I don't think you hear anyone talking about him. When you look at his raw numbers, they're superstar and All-Star worthy."

And Charlotte Hornets assistant coach Patrick Ewing, himself one of the greatest centers of all-time, has noticed Vučević's excellent play.

"I really like that kid," said Ewing, according to Robbins' Sentinel colleague Brian Schmitz. "He can shoot, he plays with his back to the basket. Needs to get better defensively, but he can play."

Through Saturday's games, Vučević leads the league with 11 double-doubles. Overall, he's averaging 19.4 points, 12.1 rebounds, 2.5 assists, and 1.1 blocks on 52.5 percent shooting. Each of those figures represents a career-best.

While the Magic have yet to build a playoff-caliber team around the Montenegrin--following Saturday's loss, Orlando stands at 6-9 in the weak East--the fact that he's improved to such a degree that he's turning the heads of top NBA coaches indicates his future is bright.

It also means that Vučević's job may become harder: with opponents keying on him now more than ever, it's incumbent on Vučević and his coaches to vary his game to make him an even tougher cover, and on his teammates to make themselves available when defenses collapse on him. Those steps are, as Magic general manager Rob Hennigan might say, part of the process.