Prior to Wednesday's loss against the Los Angeles Clippers, Orlando Magic guard Evan Fournier hadn't missed a game due to injury in his entire professional career. And as he tells John Denton of OrlandoMagic.com, he doesn't intend to make a habit of it.

"I'm going to play tonight even if I'm not 100 percent," said Fournier, according to Denton. The Magic face the Charlotte Hornets on Friday. 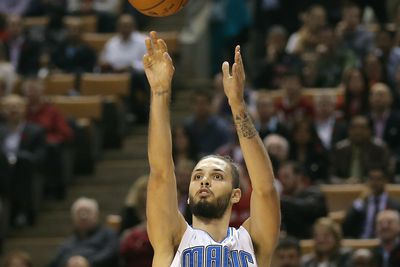 Fournier's absence is one of the subjects our Zach Oliver tackles in this game notebook.

The Magic scratched Fournier on Wednesday due to soreness in his left heel. He sustained a bruise there Monday against the Detroit Pistons when Kentavious Caldwell-Pope fouled him from behind on a fast break, prompting Fournier to land awkwardly.

Fournier's played brilliantly in his first Orlando season, averaging 17.3 points in 34.2 minutes and shooting 48 percent from the floor, including a blistering 50.9 percent from three-point distance.

Orlando tips off in Charlotte Friday at 7:00 PM Eastern.

Magic at Hornets: Orlando looks to get back on track