The NBA D-League conducted its 2014 Draft on Sunday. The league's teams picked 122 players across eight rounds of action during the event. Here's a quick look at whom the Orlando Magic's D-League affiliate, the Erie BayHawks, picked.

In his senior season, Coursey led the Atlantic Sun Conference in rebound percentage (16) and in block percentage (10.4). In part because of those efforts, Coursey earned the A-Sun's Defensive Player of the Year award.

The BayHawks' Draft at a glance

Data from the D-League's official list of Draft-eligible players

Like Coursey, Bohannon is big (6-foot-11) and comes to Erie with four years of NCAA experience. The former UTEP Miner did a bit of everything as a senior, averaging 11.9 points, 8.3 boards, 2.4 assists, and 1.7 blocks. He earned All-Conference USA Third Team honors for that performance.

Smith appeared in 122 games across four seasons with the Buckeyes, finishing with career averages of 11 points and 5.1 rebounds. The 6-foot-4 guard shot 43.9 percent from the floor as a collegian, with his tendency to shoot high-volume, average-efficiency threes partially explaining that pedestrian field-goal mark: treys accounted for 46.8 percent of Smith's shot attempts, but he converted them at a 35.2 percent clip.

Anderson, a 25-year-old point guard, played collegiately at Richmond. He went undrafted in 2011 and has played overseas since, most recently with the Turkish team Aliağa Petkim. In nine appearances with it, Anderson shot 39.2 percent from the floor for 9.4 points, 2.1 assists, and 1.2 turnovers per game.

Anderson has 10 games of D-League experience, playing for the Canton Charge in the 2012/13 season. He averaged 8.1 points and 3.3 assists per game on 34.5 percent shooting. 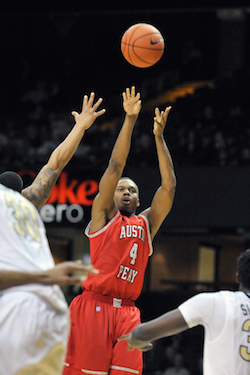 Betran comes to the BayHawks after two seasons at Austin Peay, where he averaged 16.5 points and 2.9 assists per game. Betran is a volume three-point shooter, as he took 6.8 triples per game as a Governor and converted 38.2 percent of those looks.

In his senior season, Betran ranked eighth among Ohio Valley Conference players in scoring, pouring in 15.9 points per game. He led the conference in free-throw shooting, sinking 87.7 percent of his chances at the stripe.

Listed at 295 pounds, Goode has played for both Marshall and Benedict College. In his final season as a Tiger, Goode shot 53.4 percent from the floor for 15.7 points, 10.5 rebounds, and 4.1 blocks. The season before, he averaged 3.8 blocks per game, ranking second among all NCAA Division II players.

Simmons played two seasons for Nebraska-Omaha, averaging 13.5 points, 3.2 rebounds, 1.8 assists, and 1.1 steals on 43 percent shooting. His role decreased in his final season as a Mav, as he averaged 7.3 fewer minutes per game compared to the season before, but that didn't stop him from tying for the Summit Conference lead in usage rate at 28.8 percent.