NBA power rankings: Orlando Magic out of bottom five, according to SB Nation

SB Nation's latest list has Orlando up one spot, just out of the very bottom tier of teams.

Share All sharing options for: NBA power rankings: Orlando Magic out of bottom five, according to SB Nation

After picking up their first two wins of the season, the Orlando Magic have climbed to 25th in SB Nation's NBA power rankings, which list Drew Garrison assembled. In doing so, Orlando finds itself out of the bottom five for the first time in the brief 2014/15 season. 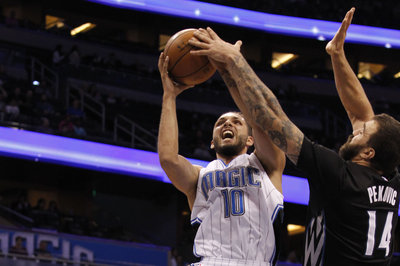 Orlando hasn't even played one-tenth of its schedule, but it's never too early to try learning. Here's what we've gleaned from the Magic to date.

Garrison highlights the role that Nik Vučević, who before opening night signed a contract extension keeping him in Orlando through the 2018/19 season, has played in the Magic's start. "Vucevic is averaging 18.6 points and 12.3 rebounds per game while shooting 53 percent from the field," as Garrison notes. And while that production hasn't been enough for the Magic to distinguish themselves, "he's clearly a foundational piece in their rebuild."

The league's bottom five, according to Garrison, now comprises the Oklahoma City Thunder, Indiana Pacers, Denver Nuggets, Los Angeles Lakers, and Philadelphia 76ers. Orlando needed a last-second shot from Tobias Harris to top Philly on Wednesday, leading one to wonder where the Magic might stand in this list had they dropped that game.