Bo Outlaw does not play for the Philadelphia 76ers

Share All sharing options for: Bo Outlaw does not play for the Philadelphia 76ers

Monday afternoon, the Philadelphia 76ers swung a trade with the New York Knicks to acquire veteran forward Travis Outlaw. The team then updated the roster page on its official website to reflect the change, only whoever made the switch picked the wrong Outlaw. 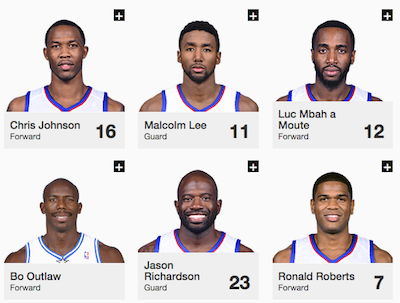 As a result of the goof, the Sixers' roster now includes Bo Outlaw, the 43-year-old Magic community ambassador who retired following the 2007/08 season.

In seven-plus seasons with the Magic, Outlaw stuffed the stat sheet with 6.3 points, six rebounds, 2.2 assists, 1.1 steals, and 1.5 blocks. He may have played 914 games across 15 seasons, but Outlaw never once suited up for Philly.

With a tip of the hat to Adi Joseph of USA Today Sports.