The hits keep on rolling in for the Orlando Magic. During the team's scrimmage on Thursday, Victor Oladipo took an inadvertent elbow to the face, fracturing a bone below his right eye. There is no timetable for his return.

Head coach Jacque Vaughn said that it's "part of basketball" and it was just a "basketball play," prior to the team's shootaround Friday morning before their game against the Dallas Mavericks. "It happened very quickly," he said. "One player going up, one player going down and 'perfect timing' for a fracture to occur."

Vaughn also said that it "could be a lot worse," after citing a story about a young lady in Ohio who is unable to continue playing the game due to a "inoperable" brain tumor. He also said that, because Oladipo was participating in the team's scrimmage, it was a good sign that he was progressing well from a sprained MCL that had kept him out of almost all of training camp and preseason.

With Oladipo out, who scores for the Magic? 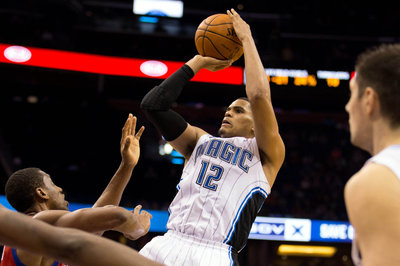 When asked about Oladipo's reaction, Vaughn said that he was "disappointed."

"He's a competitive guy. He wants to be out there with his teammates and he had already missed time with the knee injury, so he was looking forward to getting back with the group and getting back on the floor and this happened," said Vaughn. "[It's a] great test of his resolve and he just has to spend more time with me and be around me more."

Maurice Harkless, one of Oladipo's best friends on the team, said that it's "tough to see that for anybody."

Harkless said the injury occurred on "the first play of practice" and that the team breathed "a sigh of relief" afterward, grateful that the second-year guard didn't hurt his knee.

Tobias Harris said that it's "definitely disappointing," and that he texted Oladipo to find out how he was doing: "Vic knows what he has to go through to get back and he just has to be patient at this time." Harris also said that "if anyone could get through it, he's one of the best guys to get through it."

"Some of those things you can't control," said Harris. I think that's the toughest thing about the situation, really."

Nikola Vucevic said that he felt bad for him because of how much Oladipo had worked to get back from the sprained MCL, only to have this happen. "It's very unfortunate.

Vucevic, who missed 25 games a season ago due to an array of injuries, said he knows what it's like coming back from an injury to just get hurt again. He said that the best thing to do is just "take care of it, come back healthy and don't rush it."

Not only is it a big blow to Oladipo, it's also a blow to the team. While they have players who could definitely step in and pick up the slack, they'll be without one of their leaders for, potentially, an extended period of time. It's a big blow, but something that the team, and Oladipo, can overcome.