Vučević will remain under Orlando's control through the 2018/19 season.

Nikola Vučević officially signed a contract extension with the Orlando Magic on Thursday afternoon, the team announced. Citing team policy, the Magic did not disclose terms of the agreement, but Orlando Sentinel scribe Josh Robbins reports the deal could be worth as much as $53 million over four seasons--with no player or team options--keeping Vučević under Magic control through the 2018/19 season. 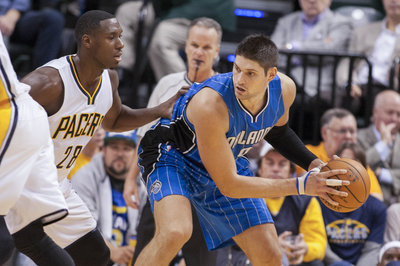 "Today is an exciting day for Nik and his family, as well as our entire organization," Magic general manager Rob Hennigan said in the statement announcing the news. "Since arriving in Orlando, Nik has demonstrated consistent work habits and a constant hunger to improve. He’s a high character, team-first player. We are proud of his development and are looking forward to continuing to grow together."

In two seasons with the Magic, Vučević has averaged 13.6 points, 11.6 rebounds, 1.8 assists, and 1.8 combined steals and blocks per game, shooting 51.4 percent from the floor. As part of the four-team Dwight Howard trade in August 2012, Orlando acquired the seven-foot center after his rookie season with the Philadelphia 76ers. In that span, Vučević has six 20-point, 20-rebound performances, tops in the NBA. As he turns 24 on Friday, his best games are clearly ahead of him. Orlando is banking on that fact as it continues to build its team in the wake of Howard's departure.