The fourth-year forward could put up big numbers despite playing for a team more focused on the future than it is on wins.

Outside of a few die-hard fans, few NBA observers expect the Orlando Magic to achieve relevance in the 2014/15 season. Some of their youngsters might improve, sure, but Orlando is still squarely in rebuilding mode. And in surveying the rosters of the league's lower-tier teams, ESPN Insider analyst Amin Elhassan, a former scout with the Phoenix Suns, identified one Orlando player, combo forward Tobias Harris, as a "terrible-team star." 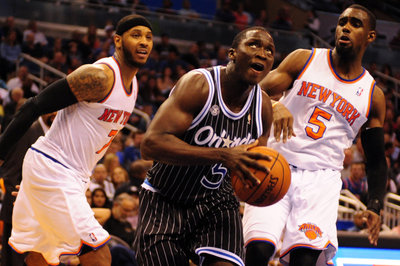 Don't miss what another ESPN Insider analyst had to say about another member of Orlando's young core.

With that term, Elhassan refers to players "who are more likely to fulfill the expectations of their fantasy owners than their team owners." After saying Harris "represents the best scoring option on the roster," Elhassan goes on to note the following:

He's a big wing with a nice touch around the basket and the versatility to play up a position at power forward. While his 3-point range is still a work in progress, he does a good job of drawing fouls and getting to the free throw line, where he converted at an 81 percent clip last season.

Regardless of what one makes of Elhassan's assessment of Harris, there's no question that the former Tennessee Volunteer is in good company: Kobe Bryant also appears on this list, as does max-contract center DeMarcus Cousins.

Through four preseason games, Harris is averaging 14.8 points, 6.8 rebounds, and 2.5 assists on 55.3 percent shooting from the floor, helping guide the Magic to a 3-1 record entering Friday's tilt with the Detroit Pistons.