NBA odds 2014/15: Orlando Magic not favored in any individual categories

According to one sportsbook, Nik Vučević's knack for rebounding represents Orlando's best chance of posting a league-leader in the season ahead.

Share All sharing options for: NBA odds 2014/15: Orlando Magic not favored in any individual categories

Fourth-year center Nik Vučević stands Orlando's best chance of posting a league-leader, with 16-to-1 odds of pacing the league in rebounds per game. Only five players have better odds, with Detroit Pistons center Andre Drummond (9-to-5) and Los Angeles Clippers pivot DeAndre Jordan (2-to-1) leading the way in a virtual tie. 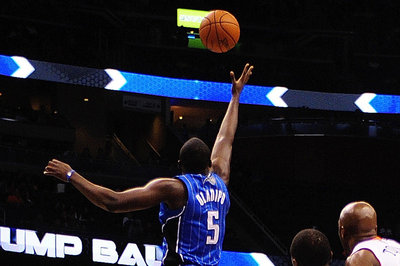 Via SB Nation partner OddsShark, a different sportsbook set the Magic's over-under for wins in the year ahead.

In the 2012/13 season, his first with the Magic, Vučević averaged 11.9 rebounds per game, ranking second in the league only to Dwight Howard. A year later, Vučević posted 11 boards per game, which figure would have ranked eighth had he played enough minutes to qualify for the leaderboard.

Elsewhere in Bovada's odds, Elfrid Payton has 15-to-1 odds of earning Rookie of the Year honors, trailing six players. He ranks second among guards only to Marcus Smart of the Boston Celtics (12-to-1). Aaron Gordon, the fourth pick in the 2014 NBA Draft, faces even longer odds at 35-to-1, tying him with Denver Nuggets wing Gary Harris. Given Gordon's age--he's only 19--it's fair to expect he'll need more time to develop than some other rookies, and he may not initially live up to his high Draft position. Further, offense drives Rookie of the Year voting, as it does with many of the NBA's other year-end awards, and Gordon is known primarily for his defensive skills.

At 200-to-1, third-year coach Jacque Vaughn ranks near the bottom in Bovada's list of Coach of the Year candidates, ahead of only Brett Brown and Quin Snyder, both at 225-to-1.

Bovada favors Cleveland Cavaliers forward LeBron James (5-to-6) as MVP, Milwaukee Bucks forward Jabari Parker (5-to-2) as Rookie of the Year, and San Antonio Spurs coach Gregg Popovich as Coach of the Year (3-to-1). In the statistical leaders category, it projects Oklahoma City Thunder forward Kevin Durant to lead the league in scoring once again (3-to-2), and Los Angeles Clippers point guard Chris Paul to take home the assists crown (2-to-3).