Orlando Pinstriped Post Mailbag no. 19: Is Andrew Bynum an option for the Magic?

The Bulls waived the former All-Star center Tuesday after acquiring him from Cleveland.

Share All sharing options for: Orlando Pinstriped Post Mailbag no. 19: Is Andrew Bynum an option for the Magic?

Welcome to the latest edition of the Orlando Pinstriped Post Mailbag. If you have an Orlando Magic question you'd like me or Tyler Lashbrook to answer, please submit it to OPPMailbag@gmail.com or post it to the OPP Facebook page.

Do you think the Magic will pursue Andrew Bynum? Not sure if it would be smart given the re-building process but could maybe be gotten for the cheap. 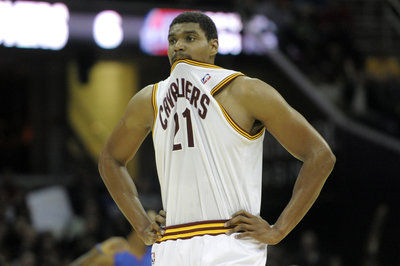 SB Nation scribe Ricky O'Donnell argues that Bynum's mind, not his body, is to blame for his career's decline.

To briefly recap Bynum's situation: after a lost season with the Philadelphia 76ers during which he failed to play a single game, Bynum signed a partially guaranteed, two-year deal with the Cleveland Cavaliers. He made 24 appearances for them, including 19 starts, but the Cavs suspended him in December for "conduct detrimental to the team." Late Monday, they dealt his contract to the Chicago Bulls for Luol Deng, and Chicago promptly waived the former All-Star center to realize salary-cap savings. Bynum has cleared waivers and can sign with any team that's interested in him.

Having laid out his situation, it seems pretty plain that Orlando wouldn't have any interest in Bynum, even with starting center Nikola Vučević out indefinitely due to a concussion. Between Glen Davis, Jason Maxiell, and Kyle O'Quinn, the Magic have plenty of center options as it is. None has Bynum's potential--he's just 26 and two years removed from an All-Star selection--but then again, none has Bynum's baggage, either.

There's also the possibility that Bynum isn't a useful ballplayer anymore: with the Cavs, he shot just 41.9 percent from the floor, a dreadful figure for a back-to-basket big man. Further, he's going to dominate the ball, given his high usage rate of 23.3 percent with Cleveland, and 23.8 percent in his last healthy season with the Los Angeles Lakers. Bynum might offer low-post scoring, but in Andrew Nicholson, the Magic already have a back-to-basket option on their roster, and he's significantly more efficient than Bynum at this stage of their respective careers.

But perhaps the biggest factor working against Bynum is that Rob Hennigan, the Magic's general manager, already had one opportunity to acquire the New Jersey native and passed. Hennigan certainly could have received Bynum in return for Dwight Howard when he dealt Howard to L.A. in 2012, but the Lakers sent him to Philly in that trade, which in turn sent Vučević and Maurice Harkless to Orlando.

In short, Bynum didn't make sense for Orlando in 2012. A little more than a year later, nothing's changed--not with the Magic as a team, and not with Bynum as a player--to indicate that a marriage between the two parties makes sense.