In this week's column, Tyler reflects on the versatile forward's tenure in Orlando and examines potential free-agent replacements for him.

Each week, Tyler Lashbrook will let loose on whatever Orlando Magic subjects capture his interest. Welcome to a Wednesday edition of Ty Tuesday. - ED

Watching Hedo Türkoğlu, whom the Magic waived on Friday, decline over the last few years has been hard. When I was younger, I watched my grandfather slowly--over the course of a few years--but surely regress into a shell of himself. He loved to hunt; he loved to go for long car rides through the back roads in his 1980 off-white, bumbling Ford pickup. But as he got older, he couldn't do either because Alzheimer's was eating away at his brain, thus rendering his cognitive function and leaving him utterly helpless.

Are the Magic better off winning or losing? Fans can't seem to agree.

Why Orlando could benefit from moving Davis to the bench.

He was eventually told he couldn't drive anymore. Ultimately he was sent to a nursing home where he would be under a full-time watch. He never fully understood why it was happening: in his mind, he was the same old guy with the same old passions and the same old ability to perform said passions. To his dying day, I doubt he ever fully understood why he was a hazard behind the wheel and why he was sent to a place where he was surrounded by other aging people.

For me--he was the only grandfather I ever knew and was one of my strongest mentors growing up--and my family, the emotions were wide ranging and ever changing. There was sadness, of course. There was remorse. There was confusion. There was nostalgia. There was anger. There was a scary, overwhelming feeling of being completely helpless and out of control. Things happen and all of us have been through tough times in our life and I've been lucky enough to avoid a whole lot tragedy. For me, though--as a preteen maneuvering my way through awkward growing stages and learning how to control emotions--it was a catastrophe. He was the first real, important person in my life that ever died and dealing with it was one of the weirdest stages of heartbreak I ever went through.

I don't tell you that to ask for pity or anything like that. I'm 21 years old now and have seen plenty of people in my life come and go, change, pass away and everything else you can think of, as I'm sure all of you have. We've all been through and have dealt with hardships in our own ways because that's life and you can't let those setbacks--small or large--keep you from, more or less, moving on. I tell you that because watching Türkoğlu decline over the past few years reminds me a little of my grandpa.

Obviously I'm not as emotionally or lovingly attached to Türkoğlu as I was my grandpa. Loving athletes is a normal thing, but it's a different kind of love. It develops even though, for the most part, you never really know on a personal level the person you're watching. I mean, you can read what their quotes in the paper or watch videos of their press conferences, but most of that is banter and rarely do they ever reveal much of an athlete's personality. It's how they play sports that you really love. It's the memories they give you that you really cherish. In eight seasons, through two different stints, with Orlando, Hedo Türkoğlu provided many delicate memories for Magic fans to embrace.

Türkoğlu became one of the most recognizable faces in Magic history, because not only was he a very good player, but he was so unique.

In those eight seasons, he became one of the most recognizable faces in Magic history, because not only was he a very good player, but he was so unique--a true avatar of those successful mid-to-late 2000s Orlando teams. At 6-foot-10, Turk had a rare combination of ballhandling skills and court vision. He navigated pick-and-rolls as a wizard, carefully picking his spots and using deadly hesitation moves; he smoothly knocked down long-range shots despite rarely ever getting much lift on his jumper.

But it was his knack for playing his best when it mattered the most and taking--and making--the biggest shots when so much was on the line that was his most endearing and enduring quality. With seconds ticking off the clock and the Magic trailing the Philadelphia 76ers, 2-1, in the first round of the Eastern Conference Playoffs, Türkoğlu took the ball from an out of bounds set. There was a hair under 15 seconds remaining and the score was tied at 81, but everyone, especially Magic fans, knew that ball was not coming out of Türkoğlu's hands.

Rashard Lewis set a pick at the top of the key and the Turkish forward got the switch he wanted, needed even. Right to left, left to right, right to left, left to right, he dribbled, staring directly into the eyes of his defender, Thaddeus Young, a long, youthful, scrappy defender. Turk made one last left to right move, this one between his legs, and hesitated, ever so slightly, before rising just behind the three-point line. The ball never had a chance of missing and the Magic never looked back.

They went on to win that series against the Sixers, moving on to play the defending-champion Boston Celtics. Six games pass and that series is tied. That's when Orlando travels to Boston for Game 7. This was a Magic team playing without its All-Star point guard, Jameer Nelson. This was the Boston Celtics--one of if not the most storied franchise in NBA history, stockpiled with three future Hall of Famers hell bound on a crash course for a rematch with the Los Angeles Lakers. But this was Türkoğlu's night and the Celtics never really had a chance. He finished with 25 points, six rebounds, and 12 assists on 9-of-12 shooting from the floor--a gem of a performance.

Without Türkoğlu, there is no 2009 Finals run. He was that good; he was that important to the team's scheme. And that's why these past four years have been so hard to watch. He bounced around between Toronto, Phoenix before returning to Orlando and he's never really shown any signs of the old Türkoğlu. Never the fastest person on the court, he understood angles and he knew how to use his overwhelming size to lay jumpers and passes over the top of more-athletic-but-helpess defenders. But he's gotten even slower with age and that jumper has fallen to a paltry connection rate: last season, he netted just one of his 24 attempts from behind the arc.

His steroid suspension that haunted him last year and likely hurt his chances at reconciling with the organization was an incident that a lot of Magic fans will forever hold against him. The substance he tested positive for, methenolone, is an anabolic steroid. Was he trying to regain an extra step in what would be a comeback season? I don't know. I'd like to believe that what he said--that he mistakenly took it from his trainer in Turkey to recover from a shoulder injury and that he didn't check if it was banned or not--is true. Either way, it's a sad ending to his eventual waiving. Even then, though, Türkoğlu had nothing but good things to say about Orlando management and its fans:

First I wanna thank Rich and Helen Devos and all the Devos family for making me feel part of the family for all these years.God bless them

I also wanna thank my number 1supporters all the Orlando magic fans and city of Orlando for all these years for the great memories,

Orlando will always be my second home

It's that second tweet that sticks with me. Because it's the memories he gave Orlando fans--the good ones--that he should be remembered for. When my grandfather slipped into Alzheimer's trap and eventually passed away, I was angry, mostly out of confusion. When Türkoğlu had appeared to not try, or not stay in shape, or not agree with gracefully aging his way into Orlando's plans like his co-partner Nelson did, I was angry. But, I remember a time before my grandfather passed when he told me that I'd have to learn to remember him, but to let him go. That simple--even silly--little message has stuck with me since I was nine years old and it's completely relevant to Türkoğlu because he deserves to have a chance on a contender with whatever juice he has left to give.

There have been reports that he's worked out for the Los Angeles Clippers. It makes sense: he'd have two pick-and-roll partners--in Blake Griffin and DeAndre Jordan--and he could be the beneficiary of a team filled with playmakers who could get him open shots. I don't know if it'll work out or not, but I hope it does. Türkoğlu deserves a chance to play for a contender again, especially one that he could really help. Whatever happens, though, I hope for the best for him. He gave me memories that can't be washed away with age; now it's time to let him go.

With Türkoğlu gone and Solomon Jones getting waived, the Magic now have 13 players on the roster. Those two open spots give the franchise a ton of trade flexibility and also allow the team to take a look, if it so chooses, at some free agents. As of Monday, Jan. 6., players can be signed to 10-day contracts.

Orlando really doesn't need any veterans; a veteran on a 10-day contract really doesn't make sense for a franchise looking to find pieces for the future. With that said, let's take a look at four young guys who could potentially fill a roster spot with the team: 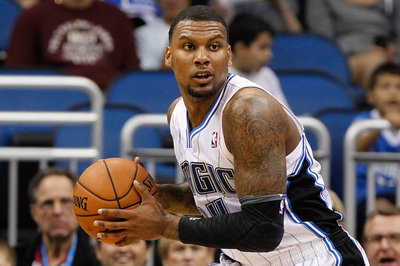 Osby, Orlando's 2013 second-round Draft choice, is probably the favorite of Magic fans. He made a name in the Orlando Pro Summer League as a scrappy, undersized, vocal guy fighting for a roster spot. He started a little slow in the D-League, but is averaging 16.1 points and 6.5 rebounds for the Maine Red Claws. Even more encouraging, however, is his 41.4 percent mark from behind the arc. If I had to guess, I'd say that Osby has the best chance in making the team. But, even then, we're not completely certain Orlando actually even wants to sign anyone. If it does, however, Osby would certainly have a leg up.

Harris played with Orlando in training camp and was recently named D-League Player of the Week. He's a skilled guard with an innate ability to create and make his own shot, something the Magic have often struggled with this season. He's averaging 27 points, six rebounds, and four assists, but his 25 percent clip from downtown is cause for concern. Would he be able to score at that rate in the NBA without a reliable long-range jumper? Probably not, but he's one to consider.

The 24-year-old former Lakers forward is dominating the D-League, averaging 24.5 points and 9.7 boards per game. He's also knocking down 36 percent of his three-point attempts and he already has NBA experience, playing 63 games in three seasons with the Lakers.

The 24-year-old former Michigan State Spartan is averaging 16.2 points and 5.5 assists in the D-League. He knows how to run the point, is selective with his shot, and has shown the ability to run an offense. He's also a reliable shooter, but he hasn't had any NBA experience. Orlando has struggled with point-guard depth, though, so he's always an option.