Jameer Nelson warming up from the field

The Magic point guard got off to a slow start shooting the ball, but he's now converting at a great level.

Share All sharing options for: Jameer Nelson warming up from the field

Jameer Nelson scored a season-high 21 points in the Orlando Magic's loss to the Miami Heat on Saturday, continuing a recent hot streak which suggests that he may have found his outside shooting stroke. 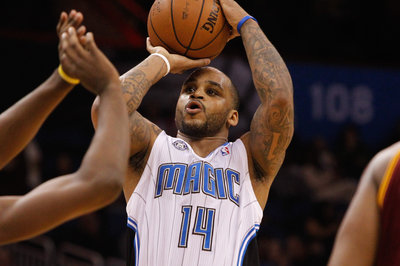 Jameer Nelson started the 2013/14 season slowly, but he's coming around of late.

Since the calendar flipped from November to December, Nelson is shooting 45 percent from the floor and 43 percent from three-point range, and he's doing the latter at a high volume: the 10th-year point guard has taken 59.2 percent of his field-goal tries from beyond the arc. That combination of volume and efficiency is a boon for Orlando's offense.

"It's good when Jameer's got it going," said Arron Afflalo, who flanks Nelson at shooting guard in the Magic's starting five. "He's another good asset for us scoring the ball. When he becomes a threat, it opens the court for a lot of us because he's one of our primary passing [players] and playmakers as well. When your point guard can shoot and become a threat out there, it kind of opens up the court for him to make plays for us."

Nelson getting hot as the season progresses is nothing new; he's traditionally a slow starter. And though the Magic finished Saturday's game ranked 24th in offensive efficiency, that figure could improve as Nelson continues to drill open threes. He's proven especially lethal stepping into transition treys when the Magic push the pace, something they achieved in two recent victories at home.