When Lewis was at his best in a Magic uniform, he created mismatches that dictated the other team's approach. In his prime, he was too big and skilled in the post for small forwards to handle, but his three-point shooting, speed, and handle enabled him to match up well against power forwards too. As his career moves into its twilight, that dynamic doesn't play out quite as often, but he brought it to bear against his former club in Saturday's win.

"He opens the floor for them and it was a tough matchup for us. You have to decide if you're going to play small or big and we tried both tonight." Jacque Vaughn on Rashard Lewis

"It's a luxury for a coach to have guys that [can], at the end of the day, make shots," said Magic coach Jacque Vaughn of Lewis. "He opens the floor for them and it was a tough matchup for us. You have to decide if you're going to play small or big and we tried both tonight."

The Magic started big with Andrew Nicholson, a traditional post player, at power forward, but abandoned that look after just six minutes and 32 seconds: Nicholson went scoreless on four shot attempts and committed a foul in that stint, and he didn't play the rest of the night.

"The Rashard Lewis effect," Vaughn said when asked about his use of the second-year player. "That's what it boiled down to." He said that Nicholson had difficulty picking Lewis up in transition because his "natural tendency" is to run to the paint, while Lewis tends to head to the three-point line. "That caused some problems for us," Vaughn said.

"He shot the ball well from three," Magic guard Arron Afflalo said. "He tried to do a good job of spacing the floor around LeBron [James], Dwyane, and Chris Bosh a bit."

On a night when the Magic celebrated their history by donning throwback uniforms, it's oddly appropriate that one of the most important players in their history performed terrifically. Unfortunately, he did so while wearing another team's colors.

After a layup by Glen Davis at the 6:23 mark of the third quarter, the Magic held a one-point advantage. Miami then went on a 15-0 scoring run to take control of the game. That run distorted the final score a bit, giving the impression that Miami dominated, when in fact the home team put up a great fight for the opening half-plus.

The Magic's offense also stalled during that stretch, though Vaughn wasn't displeased with how they ran things. "I'm always talking about how offense helps your defense and we couldn't get anything going," he said. "I think we got good looks on our end, though."

Victor Oladipo attributed Orlando's malaise to "little mistakes." He then elaborated on that subject.

"It's a very short margin for error, especially playing against them," the second overall pick in the 2013 NBA Draft said. "They make you pay every time you make a mistake and we just made too many."

Orlando had six possessions as Miami built that 14-point lead. Five ended in missed shots--notably, three of them were long two-pointers--and another ended with a turnover. That brief stretch of poor play was all the defending champs needed to seize control.

Presentation nods to the past 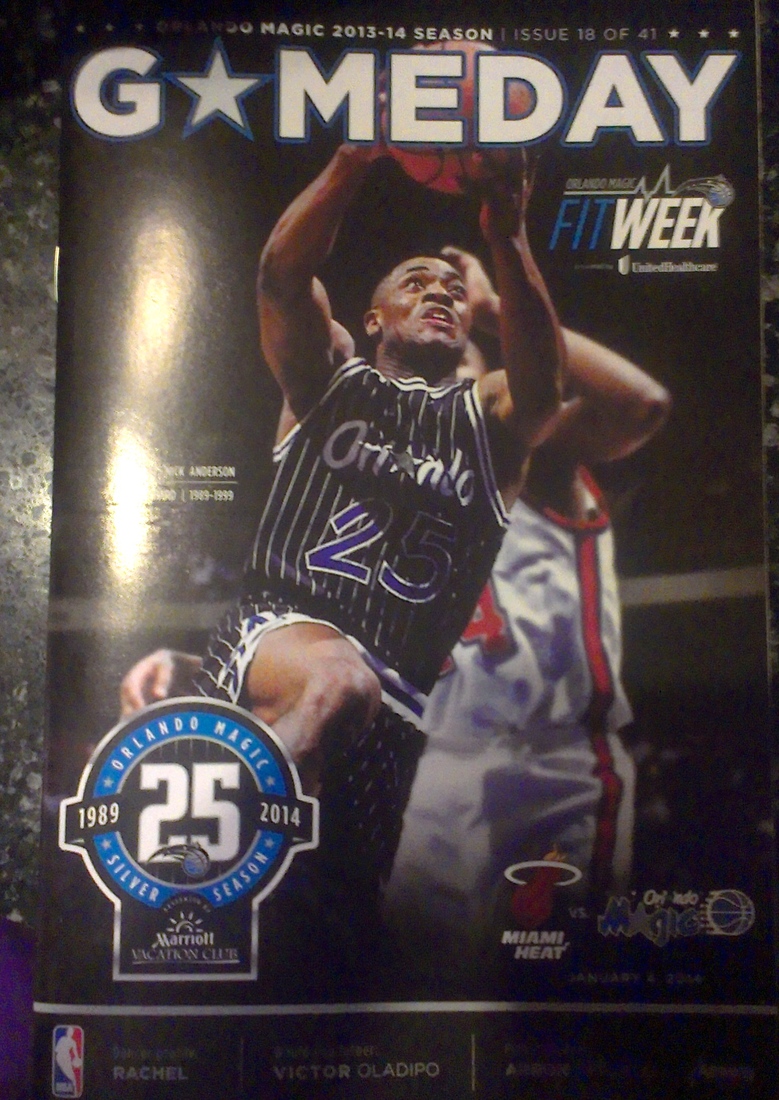 Orlando wore its black throwback uniforms Saturday, the first of 10 appearances the classic threads will make in the team's 25th anniversary season. Two touches Orlando made really stood out.

For starters, the team featured Nick Anderson, the first Draft pick in team history, on the cover of its game program. They also changed the typeface on the Gameday masthead, substituting a star for the first letter "a" in that word, nodding to the typography of the original uniforms and team logo.

Secondly, the Magic blared the signature guitar riff from AC/DC's 1981 hit "Back in Black" over the loudspeaker during player introductions.

These subtle changes in game presentation matter, and they stood out.