Share All sharing options for: Magic vs. Bucks notebook: Orlando bench pops off

The Orlando Magic won their second straight home game Friday by defeating the Milwaukee Bucks by a 113-102 final. The Magic led by as much as 25 points in the rout, but Milwaukee scored 38 points in the fourth quarter to make the outcome look more hotly contested than it was.

Orlando's reserves scored a season-high 59 points on Friday, besting its previous season-high of 53 points set in a loss against the Los Angeles Clippers on January 6th. Tobias Harris led that effort with 18 points, but four of the five other reserves who played tallied at least eight points. E'Twaun Moore and Doron Lamb contributed at key junctures in the game, with Moore scoring scoring seven of his 10 points in the fourth quarter and Lamb adding all eight of his points in the third quarter. Both players gave Orlando more separation from the visitors.

"Doron started the second half for us, and I thought he came out prepared," Magic coach Jacque Vaughn said. Lamb made a spot second-half start in place of Jameer Nelson, who left after the first quarter due to soreness in his left knee. "He was in tune to the gameplan, which is hard to do if you don't play the first half [....] I thought he took open shots and made them, and also he was good on he defensive end by just giving effort."

The second-year guard earned some praise from Arron Afflalo for playing a "mild-mannered game" in his limited minutes.

Moore, meanwhile, drew praise from Vaughn for his "versatility" on Friday, especially given that he had to play some minutes at point guard behind Nelson. With the Magic starter's return to health and the emergence of Victor Oladipo, Moore hasn't played on the ball as much in his second season with the Magic as he did in his first, but one wouldn't know it based on his performance Friday.

Orlando edged the Bucks on the glass, 44-43, despite not having a single player snare double-digit rebounds. Kyle O'Quinn led the team with seven caroms, while five other players grabbed five-plus boards to contain Milwaukee.

"We're a team that, we need our guards to rebound the basketball," Vaughn said. "Nik [Vučević] does his job as far as being a cog for us in the middle, but at the same time, we're a team that, everyone has to rebound. We have to gang rebound for us to be successful.

In an interview with Josh Robbins of the Orlando Sentinel on Thursday, Afflalo addressed his feelings regarding the Eastern Conferences' coaches' excluding him from the East's All-Star team. Given his strong performance Friday--a game-best 21 points on 7-of-13 shooting in 30 minutes, to go with five boards--it followed that he'd face more questions about All-Star Weekend.

"For me, it's created... it's given me a new level of passion, a new level of hunger," Afflalo said following his efficient outing against Milwaukee. "Sometimes, the NBA season's so long, you're losing games, you kinda get into this autopilot type of mode, but I've got an extreme fire burning, just overall, not even about tonight. I just think my focus is gonna be heightened about every little thing that I do."

Afflalo could have taken out his frustration on the Bucks by taking significantly more shots than he did, but gunning away isn't in his nature. "I'm always gonna do what the game calls for," he said. "There will be nights when I will be more aggressive, but tonight the game was in hand."

Vučević took the Amway Center court against Milwaukee for the first time since Orlando's loss to the Golden State Warriors on December 31st. He missed 12 games due to a concussion he sustained during Orlando's subsequent roadtrip. Though he played well Friday--he finished with 12 points, six rebounds, four assists, and a steal in 26 minutes--Vučević had to ask out of the game in the second half due to his conditioning, Vaughn said.

"The first half, I felt pretty good," Vučević said. "The second half, I got a little tired, but that's to be expected in my second game back."

Vučević and O'Quinn split the Magic's second-half minutes at center, with O'Quinn putting up six points and four boards in his 13 minutes. Vaughn didn't seem concerned about Vučević's lack of wind, noting that the seven-footer is one of the team's best-conditioned players overall.

When he addressed the media following the game, Vaughn said he hadn't yet spoken directly to Nelson, so he couldn't offer an update on the veteran point guard's status.

"We'll take a look at it tomorrow and see how he feels," Vaughn said, adding that the Magic will "go from there" once they know more about Nelson's condition. In a conversation with trainer Keon Weise between the first and second quarters, Vaughn learned he wouldn't have Nelson at his disposal for the rest of the game.

Nelson entered Friday's contest with per-game averages of 13.7 points and 6.7 assists on 40.5 percent shooting from the floor. 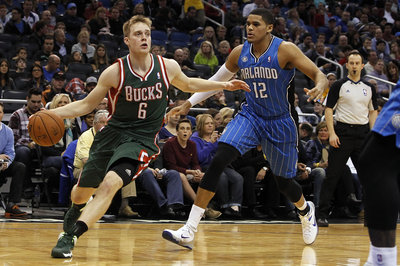 Friday marked the birthday of Stuff, the Magic's mascot. To celebrate, the Magic played a happy-birthday message from Victor Oladipo on the MagicVision between the first and second quarters. Inflatable versions of Stuff, Stuff Jr., Raymond of the Tampa Bay Rays, Burnie of the Miami Heat, Rumble of the Oklahoma City Thunder, and Jaxon de Ville of the Jacksonville Jaguars also performed between the periods.

At halftime, the non-inflatable versions of those mascots, as well as the Atlanta Hawks' Harry the Hawk, took part in a football-themed skit to coincide with Super Bowl XLVIII.

Video of the Magic wishing Stuff a happy birthday is available on the team's website.

Based on Friday's announced attendance of 17,292, one probably wouldn't have guessed that it featured the league's two worst teams. Orlando's celebration of Faith and Family Night--which promotion included a pregame concert and a postgame concert--certainly contributed to that strong attendance number. The second deck filled in nicely, even in its far upper reaches, and there were fewer empty seats in the lower bowl than usual.

Lucy Hale performed before the game, while the Sidewalk Prophets performed afterward. While in Orlando, Hale picked up a custom Magic jersey.