Magic vs. Bucks: Previewing the game with Brew Hoop

Share All sharing options for: Magic vs. Bucks: Previewing the game with Brew Hoop

The Orlando Magic and the Milwaukee Bucks play Friday night in a game that features the two teams with the league's worst records. To get a better grip on the Bucks, we contacted Eric Buenning of Brew Hoop. Eric is hilarious and actually makes the Bucks interesting, which is a daunting task. You should follow him on Twitter and you should check out Brew Hoop, because it's a fascinating site, especially given the circumstances of the team it covers.

Also: last night, Sam Vecenie and I hopped over at Brew Hoop and chatted with the good folks of the community about the draft. There's a TON of stuff in there and you can check it all out here.

With that said, let's get it.

Tyler Lashbrook, Orlando Pinstriped Post: We've got to talk about Giannis Antetokounmpo. The Greek Freak is beloved throughout NBA circles, and for good reason: He's long, athletic, and versatile, and looks, to me at least, like he could blossom into a star. How would you evaluate the early part of his career?

Eric Buenning, Brew Hoop: Well you have to consider that Giannis was not supposed to be this far along. He was supposed to be "exposed but not overexposed," as GM John Hammond put it on Media Day. Some people were even calling for him to be stashed over in Greece until he developed a little more.

Well, hahahahaha nope, we were all wrong. Giannis has hit the rookie wall more often than not recently, but that's not meant to take away from the fact that he has far and away exceeded any and all expectations set on him for this season.

As far as your star potential, I see it too. The guy just....I don't know, does things. That makes sense, right? He'll catch a ball on the perimeter and be at the basket in two stretched out steps, or he'll grab a rebound and zoom up the court and Eurostep the defender to death and get by him just enough to get his outstretched arms out of harm's way for a clean layup. It's been ridiculous watching what he can do already, even if it's little bursts surrounded by rookie struggles.

OPP: If teams could redo the 2013 NBA Draft, how high would Giannis go? OPP's Evan Dunlap had him first overall in a Mailbag we ran recently. Is that possible? Would you take him no. 1 overall?

BH: I'd take him 15th overall, again :). But honestly, he's at least top three, no questions asked. He could arguably be the best player, but I don't think Orlando and Philly fans are totally upset that they got Victor Oladipo and Michael Carter-Williams. If they had the chance, though? Well, maybe they'd take him. He's hopefully going to be that good. Pretty wild for a long-term project, eh? 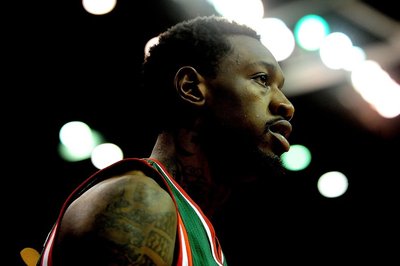 In the first season of a new contract, the Bucks' top player has regressed.

Photo by Andrew Weber, US Presswire

BH: He can right the ship, provided there aren't copious amounts of champagne bottles on the ship :(.

But really, I do believe he can. The defense, shockingly, seems to have stayed at a fairly productive level in light of all the incidents, but where Sanders needs to get things going again is offensively. He'll need a point guard willing to get him the ball in lucrative spots, but Sanders won't help himself by taking 12-foot turnaround jumpers out of the post either.

Against Phoenix [on Wednesday], he was mostly poised on offense, cleaning up messes, and using his length in the post rather than his quickness. Sometimes Sanders is in such a hurry to make a post move, he rushes everything and throws up something seriously awful, but last night he went over the top of defenders with his moves and had more success than he has all year. If he can just play within his strengths (similar to DeAndre Jordan), he'll be LARRY SANDERS! soon enough. But it's going to take more than one pretty good performance to have me rid myself of larry sanders :/

OPP: So, let's get real here, the Bucks and Magic are the two worst teams in the NBA, record-wise, at least. What has it been like for you covering the team? I understand that you go to most, if not all, of the games and sit on press row. Is there a sense of hope in the Milwaukee fan base or is it as depressing at it looks on the outside?

BH: I do attend all of the home games and try to catch at least part of all the road games, too. And yeah, almost every night is quite painful. If the Bucks aren't losing in somewhat disheartening fashion, they're getting embarrassed by halftime most nights. It can get real depressing really fast. Fans hardly fill half the arena sometimes, and when they do, some of them are leaving by the end of the third quarter, if not earlier. This is probably the low point in casual Bucks fandom, and some nights you wonder why you're putting yourself through this, even if there is a better tomorrow.

That being said, nights like the game against Phoenix (a loss) and the few wins at home are fun because they usually involve a number of players that most Bucks fans expect to be around past 2015 playing well, regardless of the final score. The loudest roars are usually for the youngest guys, and almost all of the fans I interact with are all for a youth movement, regardless of how bumpy that road is. So, as crummy as this year has been, there is at least enough light at the end of the tunnel to be able to see an outcome. If there is any hope in Milwaukee for the Bucks, it rests with those guys younger than 26 or so. The rest is essentially flotsam at this point.

OPP: If you could have one Magic player to take from Orlando and place in Milwaukee, who would it be? In this hypothetical, let's ignore any trade talk and think as if we're playing NBA 2K14 and you could add anyone without any repercussions.

BH: Is Shaq still on the Magic?

While I think about this, let me make it clear that Tobias Harris is not my answer. That trade was kind of a bummer, but I personally don't really miss him all that much. Please tell my family I love them after Bucks fans beat me to death.

Anyways, I think....I'll take....Oladipo? I can't say for sure, because he feels like another Brandon Knight-type, but I think I'll take that upside. I feel weird, now. That was way too much thinking on that question.

Thanks, again, to Eric for his insight. Visit Brew Hoop for more from Eric and its other fine staff.