Detroit exploited its biggest advantage over the Magic on Tuesday to great effect.

Despite the adjustment to their starting lineup to match-up with the Detroit Pistons' sizable front line, the Orlando Magic fell to them on Tuesday, 103-87, as that front line did them serious damage. Josh Smith, Greg Monroe, and Andre Drummond combined for 37 points and 30 rebounds in the Pistons' rout. Detroit took over in the second period and, apart from a small rally just after intermission, the Magic never seriously challenged again.

Victor Oladipo took over in the fourth quarter to finish the game with an Orlando-leading 19 points on 7-of-14 shooting. Tobias Harris scored 14 points and tallied nine rebounds for the Magic. Arron Afflalo scored 14 points against his former club. Detroit won the rebounding battle by a 56-40 margin.

Despite limiting the Pistons to 28 percent shooting in the first period, the Magic needed a pull-up jumper from Oladipo at the end of the quarter to take a 22-20 lead. Detroit crushed the Magic on the glass, recording nine offensive rebounds in 19 chances and scoring eight second-chance points. Without Nik Vučević, their leading rebounder on the season, the Magic found themselves without much height on the frontline, and neither Glen Davis nor Jason Maxiell could keep Drummond or Monroe off the glass.

Orlando shot 47.4 percent itself, but its turnover problem--it committed five--undermined its work on that end of the floor. 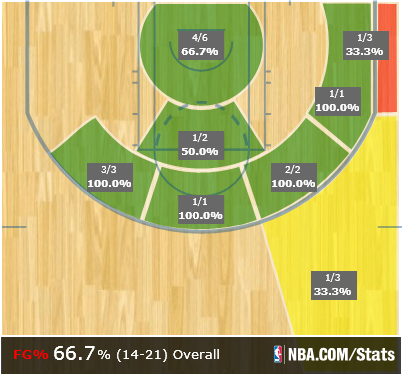 Detroit got hot from mid-range in the second period Tuesday.
Image via NBA.com/stats

The game got away from the Magic in the second period as Josh Smith and Will Bynum led a Pistons scoring binge: Detroit shot 14-of-21 from the floor, with half of those makes coming in the inefficient mid-range area. Those are the sorts of looks Orlando is all too happy to give up, particularly to the notoriously jumper-happy Smith, but they dropped for the Pistons in Tuesday's second quarter.

Orlando struggled to create open shots in the second period, though to their credit both Maurice Harkless and Harris aggressively drove to the basket in search of contact, the sort of smart play that can help a team weather a shooting slump. As it turned out, none of Harkless' four free-throw attempts found the range, with an airball among his misses. Detroit's heating up from midrange, coupled with the Magic's inability to get open looks, led to the home team building a 10-point halftime lead.

The third period started promisingly enough for the Magic, who used a pair of Jameer Nelson free throws to draw to within six points less than halfway through. But Detroit re-took command of the game, closing the third on a 17-5 run to take an 18-point lead into the fourth, with Rodney Stuckey draining two foul shots with five-tenths of a second remaining to provide the 78-60 margin. After those Nelson free throws, the Magic recorded five turnovers and just two baskets. That description makes Orlando's play sound worse than it was: the Magic appeared to move the ball better in the third quarter than they did in the first half, but those looks simply didn't drop as they ought to have.

After opening the game by missing 12 of his first 15 shots, Brandon Jennings shot 4-of-4 in the first six minutes of the fourth quarter for 10 points. His pull-up jumper with 6:33 to play put Detroit up 25 points, its largest of the night to that point. Kyle Singler added to that lead one possession later by splitting a pair of foul shots.

Oladipo asserted himself in the game's waning moments, at one juncture accounting for 16 consecutive Magic points via either a score or an assist. He mixed a three-pointer with some drives to the rim during that stretch. The ease with which he got good shots attests to the stark drop-off in quality from the Monroe/Drummond big-man duo to the Pistons' reserve corps of Josh Harrellson and Tony Mitchell.

Orlando would certainly have stood a better chance against Detroit had Vučević been available. But he remains out due to a concussion, and Maxiell's two points and one board in 14 minutes did little to swing the balance of the game.