The two youngsters have played well of late, offering Magic fans hope for a brighter future, as Tyler Lashbrook writes in this week's column.

The new year hasn't treated the Orlando Magic kindly. In 2014, the Magic rank 26th in net points per 100 possessions, via NBA.com/stats, and their win percentage is second worst with only the lowly Milwaukee Bucks hobbling behind them. But Tobias Harris and Victor Oladipo, two of its "Young Guns," have played encouragingly in the new year, even though their performances haven't necessarily translated to the win/loss column.

Harris' early struggles appeared obvious to mostly everyone closely following the team. After an encouraging half year with Orlando in 2012/13, the third-year forward struggled in his first full season with the team as he recovered from a nagging ankle injury. Rather than attacking smaller defenders in the post or beating slow-footed forwards off the dribble--both advantages of his unique skill set--Harris was more hesitant, instead settling for pull-up jumpers.

This isn't anything new: he showed signs of this reluctance to attack last season, thus raising questions to some whether he was a full-time starter or someone best suited as a bench gunner set to thrive against reserve units. And it isn't necessarily a bad thing: Harris ranks above league average from mid-range, with the left side of the floor becoming something of a sweet spot for him. But settling is different from taking good jumpers within an offense, and Harris is at his best when he isn't settling.

Settling, in Harris' case, seemed like a product of an ankle that wasn't 100 percent. In these last 10 games, Harris is starting to look healthy and it's resulted in 18 points and 10 rebounds a game on 50 percent shooting, each increases from last season's promising campaign. Advanced statistics also favor the former Volunteer: his 58 percent True Shooting is well above league average and his 24.2 percent defensive rebound rate is more than acceptable for a starting power forward.

There are still issues on the defensive end. He's giving up 1.02 points per possession in post-up situations, according to mySynergySports.com, but that might be something the Magic have to live with. His wingspan is decent, but he doesn't have the length to defend the rim or contest shots when opponents play more traditional opponents on him. Some of that will be solved when he's paired next to the 7-foot Nikola Vučević rather than Glen Davis, who is not nearly long enough to provide much shot-blocking from the help side. As we've argued before, Davis would be better suited as a reserve center with Orlando's current roster construction, but asking him to play 35-plus minutes against guys three or four inches taller than him is taxing.

Harris' three-ball has also taken a hit this year. In his half-season in 2012/13, Harris converted 31 percent of his long-range attempts; a year later that number has dipped to a paltry 21.2 percent, even though he's shooting nearly the same attempts per game in both seasons. The right corner hasn't been all that bad, but he's been dreadful from the left corner and from above the break where he's combined for a brutal 10-of-51. Will that number increase? Maybe--he has nice shooting form and his 77 percent free throw mark suggests that the touch is there on his shot. But he barely broke 30 percent at Tennessee and that was from a shorter three-point line. There really isn't a lot of evidence to suggest that he'll ever shoot much better than 30 percent from long range. That's fine if he's playing as a power forward, where his jumper would serve as a threat more than a go-to look, but at small forward that poor shooting really becomes an issue, unless he's paired with a Ryan Anderson-type shooter.

Speaking of Anderson: letting him sign with the New Orleans Pelicans was one of the dominoes that transitioned Orlando into a full rebuild. That rebuild mode led to the Magic's owning the league's worst record a year ago. That poor record netted Orlando the second overall Draft pick. Oladipo became that pick. 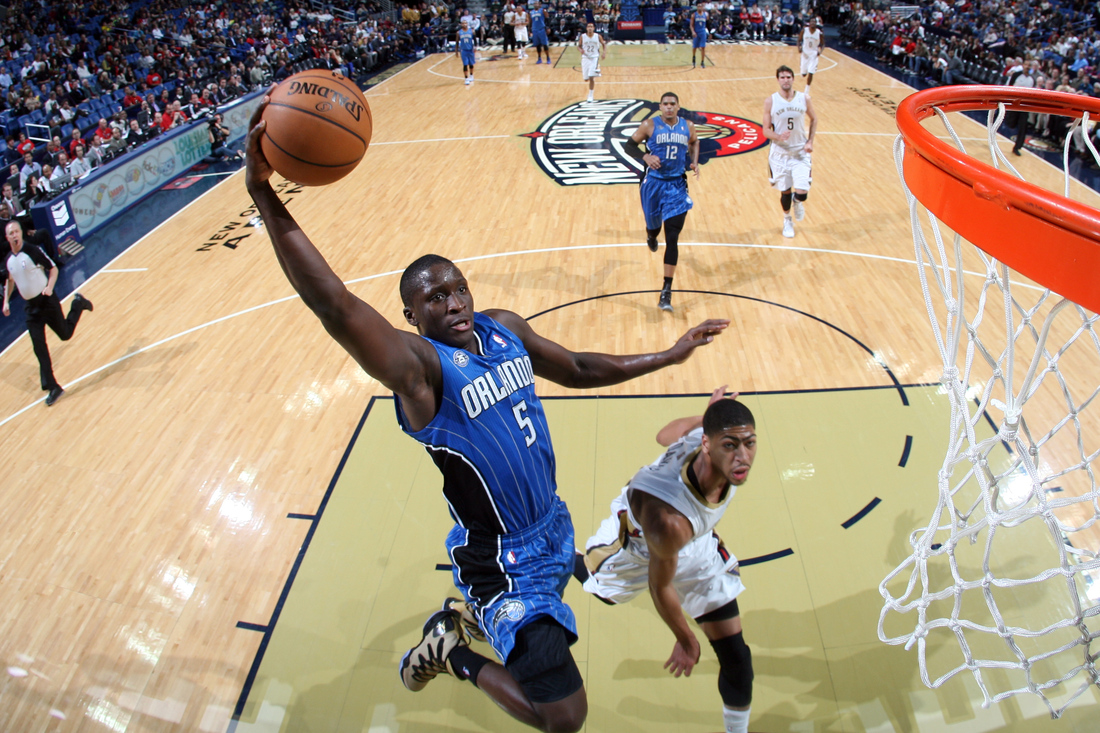 And here we are, full circle and back to Orlando's rookie. Oladipo has taken a lot of criticism thus far from a lot of different people, me included. Some of that comes with being selected second overall: to the average fan who thinks nothing of how strong a Draft is, the second overall pick is supposed to be a star. Those expectations were too high for anyone actually paying attention. There wasn't a superstar in last summer's Draft. There were, however, some very good NBA starters available.

In January, Oladipo has shown signs of becoming a very good full-time starter. The Magic rookie is averaging 15.6 points, 5.1 rebounds, and 4.3 assists while cutting his turnovers down to 2.9. His three-point percentage is right above 30 percent and his True Shooting has jumped up to 54 percent, one full percent above league average. That's in a span of 14 games and 503 minutes, a sample size high enough to suggest that he might sustain these numbers.

Oladipo has registered a True Shooting, effective Field Goal percentage, and free throw rate higher than those of Michael Carter-Williams and Trey Burke.

For the entire season, Oladipo has registered a True Shooting, effective Field Goal percentage, and free throw rate higher than those of Philadelphia 76ers guard Michael Carter-Williams and Utah Jazz guard Trey Burke. According to mySynergySports, He's scoring more points per possession in isolation (.86) than Carter-Williams (.72) and Burke (.69); he's also scoring more points per possession as the pick-and-roll ballhandler (.79) than Carter-Williams (.72) and is tied with Burke in that category. Oladipo is also shooting better inside the restricted area than both of the other highly touted rookie guards.

Remember: we're talking about someone who is playing more as a lead guard than ever in his life and against the best athletes in the world and we're comparing him to two guys who are playing a position they've played their entire livs. Oladipo was supposed to be the one behind on the learning curve, but he doesn't seem too far behind and in January, he looks even further along the development process.

Oladipo, like Harris, still has his issues. He has freaky athleticism on the defensive end, but the focus isn't always there: sometimes he gets turned around or lost and he's susceptible to back cuts. Some of that has to do with some typical rookie ball-watching, in which Oladipo loses his man who is spotted up and tries to rely on his jumping and closeout speed to make up for it. That is, however, fixable. Defensive rotations and NBA schemes are extremely complex and no rookie really understands how to play away from the ball.

He's also icy from long range on the season, even despite his recent uptick. There's really no way for an NBA offense to work when its shooting guard is shooting 29 percent on threes. In 2013/14, only Jimmy Butler, Josh Smith, Tony Wroten and Oladipo are shooting at least three treys per game and hitting less than 29.2 percent of those attempts; the Chicago Bulls and Sixers are two of the three worst offenses in the NBA and the Detroit Pistons aren't far behind. You can't survive offensively with someone who can't shoot threes jacking 'em up anyway. Orlando sports the league's seventh-worst offense; if Arron Afflalo weren't having such a magical season, it'd be even worse.

But Oladipo, in January, looks more than capable as a full-time starter; Harris over the last 10 games is combining volume scoring with efficiency, proving that he is also capable as a starter, given the right frontcourt partner to hide any of his defensive deficiencies. Given that this season is stuck in the valley of a rebuild, those developments represent things to at least cheer for.