In our latest Mailbag, we take on the daunting task of picking a favorite between the two highly touted freshmen.

We're back with another edition of the Orlando Pinstriped Post Mailbag. In this edition, we'll take a look at Kansas' Andrew Wiggins and Duke's Jabari Parker and how they'd work with the Orlando Magic. Before we start, though, a reminder that we're always looking to take your questions and you can submit them to OPPMailbag@gmail.com or through the OPP Facebook page.

Who would you want on this Orlando Magic squad? [Jabari] Parker or [Andrew] Wiggins? And who realistically would they select if both were available?

Oh, no. There's no way I make it out of this Mailbag alive. This is a good--and important--question, but it's one that splits the Magic fan base right in half.

Jabari Parker is the better player right now. Compare his per-40 numbers to those from Carmelo Anthony's freshman season and you'll see a scary resemblance. Parker is actually the more efficient scorer, records more blocks, and fouls more often. Anthony is the better passer.

Big board: Joel Embiid rises to No. 1 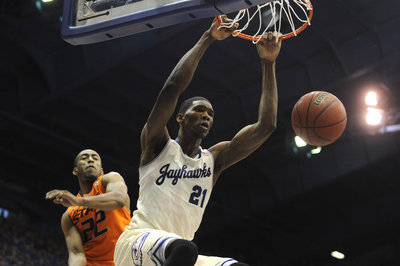 Jonathan Tjarks ranks Parker, Wiggins, and a host of other top NBA prospects.

Now, some of that has to do with how Duke is using the freshman. Parker has played a ton of minutes at center, which is why he's parked down low and blocking as many shots as he is. Playing out of position makes it a little tough to evaluate Parker, but it's the plays he makes in the open floor, the shots he continuously knocks down on the perimeter, and the plays he makes with the ball in his hands that lead one to believe that he'll translate into a hybrid forward.

Think a more athletic, bigger, faster Tobias Harris with a better jumper. That's Parker, and it's why he's valued so highly by mostly anyone who makes a career out of watching college athletes. He's listed at 6-foot-8 and 240 pounds and he's as skilled as a guard. He's advanced in the halfcourt and athletic enough to make plays in the open court.

There are issues on defense--how he moves laterally, his ability to guard in a stance, his size defending the post--but right now his steal and block rates are actually higher than Wiggins'. That said, Wiggins' defensive upside is way higher as he should be able to guard both wing positions and point guards immediately.

Another issue with Parker is his passing. That pass is fantastic. He slices through traffic, notices the corner's man digging down and dishes out right to Rasheed Sulaimon's shooting pocket.

The problem? Parker's raw passing numbers are pretty low, especially for someone who was pegged as willing and skilled in that area. Some of this goes back to how Duke is using him: he spots up off the ball a ton and also works around the baseline as a big man, but one would expect a player as skilled as Parker to have more assists than turnovers and that hasn't happened so far.

Wiggins has unlimited potential. I know that's been a cliché thing to say about the Kansas product, but it really is true. He's as physically gifted as anyone I've ever seen at this level. He has an enormous wingspan, a frame that should sustain more muscle as he ages, and a lethal combination of straight-on speed and lateral quickness. This, as you can probably guess, makes him a special defensive talent.

He doesn't always know where to go, but he's so gifted that he can recover and challenge shots rather easily. He seems to play in a stance most of the time and doesn't gamble too much. His raw defensive numbers aren't great but it's easy to see just how talented he is on that end by simply watching him.

Offense can, however, be a struggle. He isn't an advanced ballhandler or passer and he isn't a very good shooter off the dribble. He isn't a bad dribbler--he's probably further along than Victor Oladipo is--but he doesn't appear to have any go-to, one-on-one moves to get past his man, turn the corner, and attack the rim. That doesn't mean he doesn't do so anyway, but right now he uses mostly straight line drives and impressive athleticism to get shots off.

His shot is probably more developed than I anticipated. He's hitting about 33 percent from deep--not great, by any stretch--but he's hitting over one a game and doesn't look uncomfortable shooting it. His shot is quick, looks nice, and has a ton of range. One particular stretch late in the second half against Florida showed just how good that jumper can be.

In transition, Wiggins is a superstar. He doesn't have to use any special dribble moves; he can simply fly out the gate and score. Off the ball, he's an alley-oop machine as he has very good hands and unreal jumping ability. When most humans jump, they have to bend their knees to explode as the press their feet off the ground. When Wiggins jumps, he floats off the ground like a helicopter, only he does it so fast that it doesn't even look possible.

Something not mentioned a ton about Wiggins is how many free throws he shoots. Right now, his free throw rate is actually a hair above Parker's. And that's without Parker's size, ballhandling, or shiftiness navigating through the lane. It's almost like opponents foul Wiggins because he's so athletic that they know they won't stop him when he gets a full head of steam. He's netting those free attempts at a a 76.4 percent clip, a hair above what Parker converts.

Who would I want? There's really no going wrong with either. Parker would translate into one of Orlando's most efficient scorer almost immediately and Wiggins would be the highlight reel with an improving jumper and unlimited upside. Parker helps the Magic win more now, but Wiggins can play either wing position and immediately becomes a cornerstone in his own right. I'd take Wiggins because I wouldn't be the one to miss out on him.

I imagine the Magic siding with me, if given the opportunity. Most people seem to agree that Wiggins has the higher upside, and if Orlando agrees, then it would almost certainly select the Kansas product. The best part of this draft, in general, is that both prospects are so fascinating that having the opportunity to select either will immediately be a step in the right direction.