The seventh-year swingman may not earn a spot due to Orlando's poor record, but two national writers agree that he merits the honor.

The NBA announced the starting lineups for its 2014 All-Star Game on Thursday, and they offered few surprises. The next major All-Star announcement comes on January 30th, when TNT will unveil the coaches' selections for the All-Star reserves in a special edition of Inside the NBA at 7 PM Eastern.

The case for and against fringe All-Stars 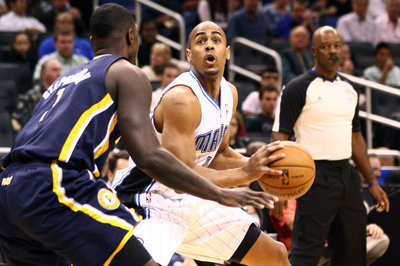 At SBNation.com, Orlando Pinstriped Post contributor Tyler Lashbrook breaks down the All-Star credentials of Arron Afflalo and a few other bubble candidates.

At SB Nation, Mike Prada names Afflalo as a reserve for his team. Though he concedes that Indiana Pacers guard Lance Stephenson has a solid case, Prada eliminates him from consideration in favor of Afflalo and Chicago Bulls center Joakim Noah, picking both to represent the East as "wild cards."

"The burdens those two carry to be at the top of their games every night clinch it for me," Prada says of Noah and Afflalo. "The Pacers can win if Stephenson has an off night. The Bulls and Magic have no chance if Noah or Afflalo are struggling."

Meanwhile, at ESPN Insider, Tom Haberstroh also picked Afflalo for his East squad as a wild card. "Afflalo isn't buckling under the scoring load like he did last season and doing a little bit of everything for the Magic," Haberstroh says. He also considered Toronto Raptors guard DeMar DeRozan for Afflalo's spot, but the Magic swingman won out because of his superior efficiency.

Afflalo is averaging 20.2 points, 4.5 rebounds, and 3.8 assists on 58.3 percent True Shooting; as Haberstroh points out, only five qualified players scoring 20-plus points per game in 2013/14 do so on better efficiency.