Tuesday's tilt against Brooklyn marks his 622nd career game in a Magic uniform.

Jameer Nelson took the floor for the Orlando Magic's game against the Brooklyn Nets on Tuesday, and in so doing surpassed Dwight Howard for second place on the Magic's all-time list. Tuesday's game marks Nelson's 622nd in Orlando, trailing only Nick Anderson (692 games) in franchise history. 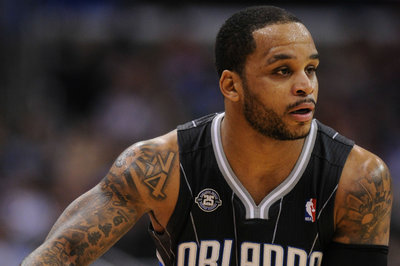 "It means a lot," Nelson said Tuesday when asked about the honor, according to Brian Schmitz of the Orlando Sentinel. "I've been fortunate to be in this situation."

If Nelson remains healthy and stays with the team for the 2014/15 season, he will ultimately overtake Anderson for the Magic's all-time lead in games played. Nelson's 2014/15 contract is only partially guaranteed, according to ShamSports' salary database.

Nelson has spent his entire 10-year career with the Magic, who acquired his Draft rights via trade with the Denver Nuggets in 2004. He owns per-game averages of 12.7 points, 3.1 rebounds, and 5.3 assists on 44.5 percent shooting.

In the 2012/13 season, Nelson passed Scott Skiles to become the Magic's all-time leader in career assists.

Magic at Nets: Orlando looks for second win over Brooklyn