The versatile forward became a fan-favorite in his eight seasons with the Magic. 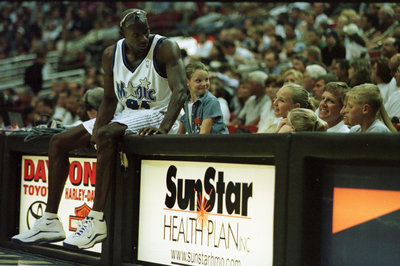 In this story from 2012, Orlando Pinstriped Post salutes Bo Outlaw as the Magic's cult-classic player.

Outlaw signed with the Magic prior to the 1997/98 season and quickly became a fan-favorite because of his energetic play and winning personality. With two career triple-doubles, Outlaw stands in a four-way tie for second place on the Magic's all-time list, trailing only Hedo Türkoğlu.

The first 2500 fans in attendance Friday will receive a commemorative photograph, measuring eight by 10 inches, of Outlaw and Magic point guard Ronnie Price. Outlaw will also join Paul Kennedy and Anderson on Magic Live, the Fox Sports Florida pregame show. In addition, Scott will appear with David Steele and Jeff Turner on the Fox Sports Florida telecast of Friday's game. Tipoff against the Lakers is set for 7 PM.