The second-year big man makes a big impact on both ends of the floor. Tyler Lashbrook breaks it down in this week's Ty Tuesday.

The Orlando Magic need to play Kyle O'Quinn more. That statement, of course, comes with some caveats: Glen Davis is eating up 32.4 minutes per game and even without Nikola Vučević, who has been out for almost two weeks, Orlando still has three other big men in Tobias Harris, Andrew Nicholson, and Jason Maxiell.

Playing time is tight in the Magic frontcourt; unless the team makes a trade to unload some of its big men, that line will remain crowded. Add in that Vučević could return soon and you can see where this is going. Six players occupying two spots on the floor isn't a great situation. It's likely why Harris slides to small forward when Vučević is active--there's simply playing time available on the wing, where there isn't any down low.

But O'Quinn needs to play more. The Norfolk State product has been the beneficiary of an increase in minutes with Vučević's injury, and he's made the most of it. He's averaged 10 points, 7.7 rebounds, and 2.3 blocks in 21.6 minutes minutes over Orlando's past three games, and when Jacque Vaughn opted to cut the rotation down Sunday night against the Boston Celtics, O'Quinn was one of the seven guys he chose.

For good reason, too. Of all the guys on Orlando's roster, only two have produced an individual positive net rating: Arron Afflalo, amidst the best season of his career, and O'Quinn. Even then, Afflalo still hasn't lifted the Magic to positive numbers in his time on the court; with the UCLA product, Orlando is still producing a minus-6.4 rating. In 308 minutes with O'Quinn, however, the Magic are 0.2 points per 100 possessions better than their opponents, per NBA.com/stats.

Some of that positive rating has do with his level of competition. Despite recently getting big minutes against first-string competition, O'Quinn hasn't played against too many important lineups. His minutes have been up and down and a lot of them have come in garbage time or against reserve units. Go back to O'Quinn's rookie season and you'll see a trend: the big fella posted a 107 offensive rating compared with a 106 defensive rating in over 600 minutes of playing time in his first year in the league. In his first season and a half, the Magic are better when he is on the floor. 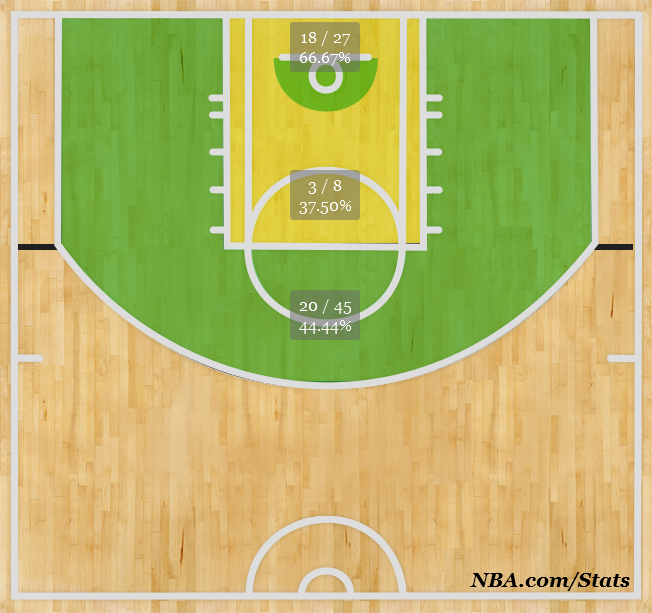 That's because he's serviceable on both ends of the court. Typecast as a brute, O'Quinn is surprisingly nimble on his feet, has nifty passing instincts, and very good touch from everywhere in the mid-range. 90 percent of his shots come within the restricted area or from mid range, and he's knocking down shots from both spots at a pace that is above league average. His shot chart really is a thing of beauty.

He's also scoring out of the pick-and-roll at a very efficient rate. Per mysynergysports.com, O'Quinn has scored on 61 percent of his pick-and-roll opportunities, good for 11th in the entire league. His footwork leaves some to be desired when working out of the post, but his footwork as the screener is fantastic. He pivots the right way and is surprisingly graceful when he catches the ball. Here's an example from Sunday night:

When he's not working as the screener, O'Quinn is efficient as a spot up shooter. He doesn't have the range or the smoothness of Nicholson, but he takes smart shots and plays within himself outside of the paint. As his shot chart highlights, he works as a safety net for Orlando's offense. He isn't the first option, and never will be, but he can work out some kinks in an offense that is often cramped for space, especially when he's operating as a facilitator from the high post.

On defense, O'Quinn is active and, by most accounts, extremely loud--an underrated quality for a good, defensive back-line big man. Overall, again via mysynergysports.com, he is giving up just 0.65 points per possession, ranking him seventh in the league as a defender. That comes with some caveats, though: sample size here is an issue and tracking these types of things can get a little murky. But that individual excellence falls in line with his overall effect on Orlando's defense.

He isn't very athletic, but he plays instinctually and fits the Magic's scheme on the pick-and-roll. Rather than blitzing the screener, Orlando's bigs typically sit back, conceding long jump shots in order to protect the rim and to slow down the ball handler until the defender in tandem recovers. It's a smart idea and fits the mold of O'Quinn and Vučević, two extremely long guys who aren't very quick laterally.

O'Quinn uses that length on both sides. His enormous 7-foot-5 wingspan hides most of his athletic deficiencies and he knows how to use it. It helps him in finishing around the rim and it also helps on defense, where most of the guys he guards have a wide speed advantage. Watch how he rotates over on this Brandon Bass jumper:

His game has drawbacks, though: he stands fairly vertical on defense, rarely ever sitting down in a stance, and he hacks at such a high rate that he would foul out if he were to play more than 30 minutes per game. His turnover rate of 19.6 percent is also alarming, especially for a guy who isn't really tasked with using too many possessions.

But he's been good enough to deserve playing time, and not playing has to be frustrating. Or maybe it's the not knowing that's really difficult to deal with. Take this quote from O'Quinn, via John Denton of OrlandoMagic.com:

"Like I have said, I don't know if I'm going to play or not play most nights, but I've had to stay ready. Sometimes I catch myself checking out and not being into the game, but it doesn't work to my advantage. It helps me to stay locked in play to play. It's one of the things that I'm trying to work on to stay ready."

You can imagine the challenge of not knowing your role. How can you prepare properly--both mentally and physically--if you don't know exactly what's expected of you? Vaughn isn't fully to blame here, though. He didn't sign or draft a crowded frontcourt, and figuring out that rotation has to be quite a challenge, especially with such an odd mix of players young and old.

It does, however, put Orlando in a bind. O'Quinn's contract isn't fully guaranteed for the 2014/15 season, per ShamSports, leaving his career with the team to question. If he hasn't established an identity or role in his first two years, what makes leadership think he will next season, especially if the frontcourt is still crowded? Waiving Maxiell, whose contract isn't guaranteed, would cut $2.5 million, and that seems like a step that makes more sense, but there's really no telling.

Regardless, O'Quinn has proven to be a serviceable, young big man and Orlando would be better served finding him more minutes. But when Vučević returns, it's tough to imagine him getting those minutes, unless the team is unsold on Nicholson or ships out any combination of the incumbent power forwards, which brings even more questions to the table. One can imagine, however, that O'Quinn will eventually find an NBA home, whether it's with the Magic or elsewhere.