A look at the Magic through half of their schedule

The Magic have reached the midpoint of their season. Orlando Pinstriped Post takes stock of the team.

Share All sharing options for: A look at the Magic through half of their schedule

The Orlando Magic played their 41st game of the 2013/14 season on Sunday, officially reaching the halfway mark of their year. Orlando Pinstriped Post endeavors to take stock of the team at the season's midpoint.

Magic at a glance

Here's a look at how the first two quarters of Orlando's season have gone.

It's still fair to question whether Victor Oladipo will ever develop the playmaking and ballhandling skills necessary to play point guard full time at the NBA level, but the rookie is making strides as the season progresses. For example, in his first 21 games, Oladipo averaged 3.5 assists and 3.7 turnovers; in his last 20, however, he's increased his assists to four and decreased his turnovers to 2.9.

There are still flaws in Oladipo's game, particularly his inability and disinclination to drive to his left, but it's clear he's becoming more comfortable reading opposing defenses out of the pick-and-roll. Further, he's curbed the hit-ahead passes that he'd badly overthrow into the baseline photographers in the first quarter of the year, instead getting those passes to their targets or holding onto the ball if the play isn't there.

To become an even more complete player, Oladipo will need to develop a more consistent outside shot in addition to improving his passing and ballhandling skills. It's worth noting that in the second quarter of the season, he averaged 14.8 points per 36 minutes on 51 percent True Shooting. While that True Shooting mark ranks below the league average of about 53 percent, it nonetheless indicates some measure of growth. His progress in the final months of the season certainly merits observation.

Vučević conspicuous in his absence

The Magic badly need Nik Vučević, out since January 6th with a concussion, back in the lineup. According to NBA.com/stats, the starting five on which coach Jacque Vaughn has settled in Vučević's absence--Jameer Nelson and Oladipo at the guards, Arron Afflalo and Tobias Harris at the forwards, and Glen Davis at center--sports a minus-27.5 efficiency differential in 121 minutes together over 12 games; put another way, Orlando's opponents are outscoring it by 27.5 points per 100 possessions with that group on the floor. 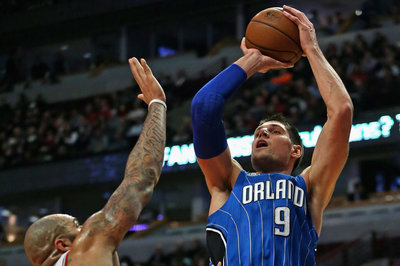 Here's how the Magic fare in several key categories with Nik Vučević on the floor and off it.

Nelson, Afflalo, Harris, and Davis played 90 minutes with Vučević across nine games before the third-year center sustained that concussion, with an efficiency differential of minus-3.9. That group is Orlando's most cohesive and allows the Magic to bring Oladipo off the bench, where his ball-dominating tendencies are better suited for now. Playing Davis at power forward also doesn't tax him as much defensively; Vaughn said Sunday that he recently told Davis he appreciates the sacrifices Davis has had to make with Vučević out, as he draws tougher defensive assignments when Vučević is unable to play.

Though Vučević hasn't taken the so-called leap in his third season--his per-minute scoring has increased slightly from 2012/13, but his per-minute rebounding has declined, and his Player Efficiency Rating is just one-tenth of a point higher--he's nonetheless a solid player whose ability to rebound and defend, particularly in the pick-and-roll, masks a lot of Orlando's weaknesses. The Magic earned a win Sunday without him, but that victory makes them just 2-16 without him since acquiring the seven-footer in the Dwight Howard trade.

There's a vocal contingent of Magic fans--I don't know whether to characterize that contingent as a minority or as a majority, but it's there--who would love to see the Magic bench Nelson in Oladipo's favor, or simply trade Nelson away. There's a degree of logic in that point of view: Nelson turns 32 in February and is thus unlikely to play a major role on the next great Magic team. Why not see if a contender would yield a future Draft pick or a prospect in exchange for point-guard help off the bench?

Fans sometimes talk about the idea of Nelson while ignoring the reality of what he produces.

There are a few reasons, but I think the discussion of Nelson oftentimes overshadows just how skilled he still is, and I believe fans are letting their boredom with Nelson's tenure with the team--he's been the team's starter at the point since some of these fans were in middle school--affect their perception of him. Put another way, fans sometimes talk about the idea of Nelson while ignoring the reality of what he produces.

In the last quarter of the season, Nelson's averaging nearly three assists per turnover with a solid Pure Point Rating of 6.1. His per-minute scoring is down a touch from its 2012/13 levels, but he's improved his efficiency, shooting an above-average 54.6 percent True Shooting.

Apart from his productivity, we must acknowledge these simple facts about Nelson: he's the team's best and most natural playmaker. He has the best handle and the best court vision of anyone on the team. His ability to probe defenses on his drives by keeping his dribble alive opens opportunities for cutters and enables the Magic to improvise if a play breaks down.

No, Nelson does not play spectacularly, and even his staunchest supporters would concede he is prone to launching some ill-advised threes every now and again. On the whole, however, losing Nelson--be it to injury, trade, or a dramatically reduced role--would make the Magic a borderline unwatchable team. Even with him, Orlando ranks 26th in the league in offensive efficiency on the season as a whole. Turning some or all of his touches over to inferior playmakers (read: anyone else on the team) would lead to disastrous results.

It's fair to wonder what's happening with Andrew Nicholson. Arguably the Magic's most effective overall scorer in his rookie season, he's not improved in his second year despite expanding his game to include a three-point shot from the corners. And in the last quarter of the season, the St. Bonaventure product has found himself mired in a shooting slump.

In Orlando's last 20 games, Nicholson has made 18 appearances and earned two Did Not Play-Coach's Decisions, including Sunday against Boston. In those games, Nicholson is shooting 33.7 percent from the floor and 24.1 percent from three-point range, averaging 12 points and eight rebounds per 36 minutes. Even acknowledging his advanced age--he turned 25 in December--compared to that of most other second-year players, there's no easy explanation for this sustained drop-off in productivity.

To these eyes, Nicholson appears to be stronger and more comfortable defensively, in both one-on-one and team situations. There's no question he's a better rebounder than he was as a rookie. Those improvements figure to be the keys to more playing time, and yet he's averaging just 13.3 minutes per game in Orlando's last 20 contests.

I'm not sure how Nicholson can break out of his funk, but I do know that he can't do it from the bench. At some point, Orlando needs to get a better idea of what it has in the Ontario native. Perhaps he'll see more opportunities in the second half of the season.