Share All sharing options for: Horace Grant wants NBA to return to "fundamentals"

Friday night marked Horace Grant's first in The City Beautiful since his final game against the Orlando Magic as a member of the Los Angeles Lakers way back in 2004. The Magic recognized the 48-year-old power forward in a ceremony between the first and second periods, and Grant said he felt "honored" by the "humbling" invitation to return as part of the Magic's Legends Nights program, wherein the team honors key figures from its history. 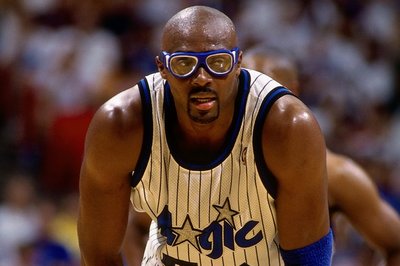 "It took a little time, but I'm here," Grant said in a news conference before the game. "I'm grateful and humble to be a part of something special. I had some great years here. I can't wait to see the future of this great organization and this team."

Since retiring, Grant has moved to San Luis Obispo County, California, where he lives with his wife, three daughters, and son. He works "part time" as an ambassador for the NBA, travelling the world to do "clinics and camps for kids, speaking with sponsors and potential sponsors, and just enjoying things like that." He also plans to open an after-school center called Area 54 Academy--a reference to his uniform number--for at-risk kids in San Luis Obispo County. With this new venture, he hopes to provide an alternative for the Boys and Girls Clubs, which recently closed their doors due to a lack of funding where Grant lives.

"It's gonna bring those kids off the streets that don't have anything to do after school," Grant said. In addition to offering access to computers and tutors, Grant said Area 54 Academy will have "all kinds of sports," including soccer and, yes, basketball.

Grant still loves hoops and watches several NBA teams, including the Magic and Chicago Bulls, another team for which he played during his 17-year career, but he said he simply cannot watch some teams in the league today--he declined to say which ones--because they play with "no fundamentals." He'd like to see the league's players and coaches return to a more principled style of play.

"Back in my day, it was more physical. You had to be mentally prepared as well as physical in terms of bangin' and shootin' the jumper." Horace Grant on how power-forward play has changed since his retirement

"Back in my day, it was more physical," Grant said, specifically referring to the play of power forwards, the position he manned with Orlando and throughout his career. "You had to be mentally prepared as well as physical in terms of bangin' and shootin' the jumper. I wish that guys could go back and work on their craft in terms of 15- to 17-foot jumpers, as well as the knowledge to bang down low.

"I think, personally, it's a lost art that the NBA, that its guys need to get back to."

Perhaps the children of San Luis Obispo will pick up some of those skills at Area 54 Academy when it opens, though whether two-point jump-shooting power forwards will ever return to vogue in this league--which prizes spacing and three-point shooting to a greater degree than it eer has--remains an open question. But we certainly know how Grant, one of the greatest players in Magic history and a key cog on their first Finals squad, wants the NBA to proceed.