The Bobcats built a 21-3 lead in the first quarter and held off the Magic's rallies throughout the evening, dealing Orlando its 10th straight loss.

Share All sharing options for: Magic vs. Bobcats notebook: Orlando lacks energy in loss to Charlotte

The Orlando Magic's losing streak reached double-digits on Friday in their 111-101 defeat against the Charlotte Bobcats at Amway Center. Arron Afflalo's 24 points weren't enough to snap Orlando's slide, and the loss clearly took its toll on the Magic's players, if their tones of voice and body language in their post-game availability sessions are reliable indicators.

A finish most foul

The Bobcats made frequent trips to the foul line in the fourth quarter, taking control of the game by scoring with the clock stopped. In the period, Charlotte went 16-of-20 at the stripe after going 10-of-15 in the first three quarters combined.

"[When] every overly aggressive move that happens down the stretch results in two points for them, that's a tough circumstance to put yourself in," Afflalo said.

"Credit them for realizing the bonus situation and keep trying to get into the paint and causing us to react," he said.

E'Twaun Moore committed Orlando's fourth team foul of the fourth quarter at the 7:47 mark. The Magic would commit six more personal fouls the rest of the period, yielding an additional 12 free-throw tries. Because Orlando couldn't keep its hands to itself, the Bobcats took 20 foul shots in the fourth quarter, but only 15 field-goal attempts. Veteran center Al Jefferson helped the Bobcats put the game away by shooting 4-of-4 from the floor and from the foul line in the final frame, finishing with 12 points in the period and 30 for the game.

"Al's a tough cover," Vaughn said. "His ability to put the ball on the ground and pass out of it with cutters... tough to guard." He praised Glen Davis for taking on increased defensive responsibilities with Nik Vučević, the team's usual starting center, out due to a concussion.

"He's giving us all he has," Vaughn said of his stop-gap center, whom the team generally lists at 6-foot-8. Davis finished Friday with 11 points, 11 rebounds, five fouls, and four turnovers in 33 tough minutes. There's no questioning his effort, but it's clear that playing heavy minutes at center against one of the league's best back-to-basket scorers taxed him.

The Magic couldn't muster much spirit or enthusiasm in Friday's loss, falling behind early by a 21-3 margin. Though they did earn a one-point lead at halftime, the sharper and crisper Bobcats took care of business after intermission.

"Positive energy, high intensity on defense, and confidence on offense, these are all intangible things," Afflalo said. "These aren't physical things. That comes from being mentally in tune--believe it or not--[and] being happy in the moment, having energy to do your job at the moment." The veteran swingman says the Magic have to improve "collectively" in these areas.

"Our energy has to be higher. We have to believe we can win that game." Tobias Harris

Afflalo and Tobias Harris separately suggested that some Magic players might have had "dead legs"--they used the same term--after playing a triple-overtime game on Wednesday, but neither was willing to use fatigue as an excuse. Afflalo didn't even play in that game, as Friday's was his first one back after sitting out with a sprained right foot.

"We have to pick up our energy," Harris said. "We have to be excited. Whether we're down 10 points, eight points, six points--as we were in the last six minutes--our energy has to be higher. We have to believe we can win that game."

Similarly, Vaughn declined to use Wednesday's game as a crutch. "I'm a no-excuses kind of guy," he said. "The rules were fair tonight for everybody."

As part of the Magic's 25th anniversary celebration, the team has played videos paying tribute to visiting players and coaches who previously worked for the team. The Charlotte-Orlando ties are strong, leading to a longer video than usual Friday. 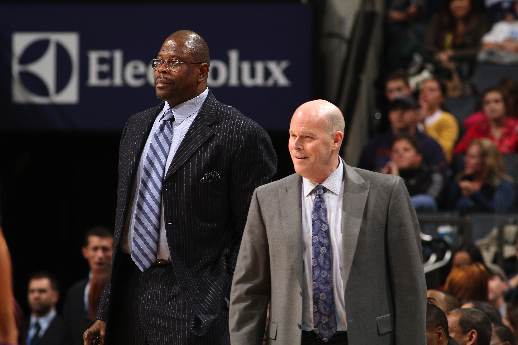 In addition to former Orlando forward Josh McRoberts, Friday's video--which ran during the first timeout of the game--also featured Bobcats coach Steve Clifford and assistant coaches Bob Beyer, Patrick Ewing, Mark Price, and Bob Weiss. Clifford, Beyer, and Ewing served as assistants under Stan Van Gundy from the 2007/08-2011/12 seasons. Price joined Van Gundy's staff in 2011/12 as well. Weiss was an assistant coach with the Magic in the 1989/90 season.

The Magic have partnered with Indochino to offer their fans a Traveling Tailor experience. From January 17th-26th, the online menswear company will be set up at the Church Street Exchange (located at 101 S. Garland Ave. in Orlando) to measure and style customers and build them suits.

Fans wishing to take part in this event must make reservations at this website. Those who purchase a suit will be eligible to win two custom Magic jerseys, two tickets to an upcoming Magic home game, and two tickets to the Orlando Magic Youth Foundation Black Tie & Tennies Gala.

Magic big man Kyle O'Quinn recommends Indochino. "The Indochino experience was truly top of the line all the way," he said. "They provided me with the perfect suit that I can wear for years to come. The style fits me perfectly and even more importantly I have a size that works, which can be hard to find."