Tyler Lashbrook and Sam Vecenie take a look at the 2014 Draft's point-guard class.

Share All sharing options for: NBA Draft 2014: Talking about prospects at point guard

As everyone in this community is well aware, the NBA Draft is a pretty big deal as it pertains to the Orlando Magic's future. In order to prepare for it, we at Orlando Pinstriped Post are providing you with some insight throughout the season on the crop of prospects. In this e-mail chain, Fear the Sword's Sam Vecenie and I talk about the point guard class, the position which we feel is the weakest of an otherwise very good Draft.

With that said, let's begin:

Tyler Lashbrook: Sam, how goes it? 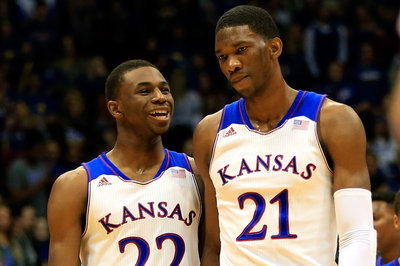 We've run several of these e-mail chains, but we haven't yet touched on a Draft topic that is tearing Magic fans apart at the seams: point guards.

It's no secret that Orlando needs a young point guard and all signs seem to indicate that Victor Oladipo, while a special prospect, is not a full-time point guard. In our lottery boards we released last week, we both had Marcus Smart at no. 5 overall and Dante Exum at no. 7. I had Arizona State's Jahii Carson at no. 13 and he's my third-best point guard in the Draft, but there are plenty of other guys we haven't talked about yet.

Who are a couple of guys you've got your eye on after Smart?

Sam Vecenie: Marcus Smart is clearly the class of the NCAA point guard class this year. No one else comes particularly close to combining his athleticism and killer mentality. If he had a slightly better shot, we'd probably be talking about him in the class of the top four.

After him is a bit more murky. Jahii Carson has been considered the "best of the rest," but I have some serious questions. I was at the UCLA-Arizona State game Sunday night, and I came away with more questions than answers regarding his play. The quickness and ballhandling ability is evident, but UCLA's length really bothered him. Norman Powell and Zach LaVine (6-foot-4 and 6-foot-5, respectively) were the main players tasked to guard him, and he really struggled to get into the paint. Then he missed a couple of open outside jumpers and looked frustrated. He picked up his fourth foul with about 15 minutes left in the second half and had to sit for a while.

Now, that's just one game. He's shooting 46 percent from three, and won't always go 0-of-5 from three and get frustrated. But for a guy who is 5-foot-10, the ability to play against size and length is an essential skill. It's a worry that's going to persist with him. I'd rank Tyler Ennis over him right now if he were to enter the draft, and I wouldn't think twice.

Tyler: Other than a game earlier in the year against Miami, that game was Carson's worst. The Bruins have long guards and it visually bothered him all night. I don't think it's enough for me to knock him down. If anything, it's his turnover problems that worry me. A lot of that has to do with he's asked to do on that team and the players around him, but it's definitely a problem.

I'm with you on Ennis, especially if he's considering leaving. He's not the greatest athlete and he's struggled a bit in the paint, but he's always in control in a way that is rare for a 19-year-old freshman. His turnover rate is extremely low, especially for a guy tasked with most of the ballhandling, and he's averaging nearly seven assists per 40 minutes, an absurd number for a freshman. Obviously, who he plays with helps some of that, but he's definitely a top point guard prospect, especially if his three-point percentage stays around 38.

From what I've seen, Dante Exum has an incredible first step, the ability to create his own offense, and a jumper that doesn't look too bad fundamentally. Tyler Lashbrook

One guy we haven't talked about much is Dante Exum. Obviously, he's a top prospect and if we're considering him a point guard, he makes a strong case as the no. 1 guy, even ahead of Smart. One of his strengths--the one that scares me most--is his anonymity. We don't really know a whole lot about him other than the limited tape we get to see. From what I've seen, he has an incredible first step, the ability to create his own offense, and a jumper that doesn't look too bad fundamentally. I don't know if he's a point guard because, well, I've only seen him play two full games, and highlight tapes aren't really the best way to fully scout someone. But he's intrigued a lot of Magic fans because there's seemingly so much potential there and Magic fans are starving for a point. What say you?

Sam: Yeah, Ennis' poise, pace, and distribution are probably the best in the NCAA right now. He's only a freshman, but that's honestly where he is right now. Might be the most impactful freshman in the country. Speaking of freshmen, we should probably mention Andrew Harrison, but my guess is the Harrison twins don't declare. Andrew isn't particularly ready yet to run a team, and would be better served to wait until next season when he can be a lottery pick.

Yeah, with Exum, it's just hard for me to say much of anything with authority. I've watched him in the U19 games a couple of times, and at the Nike Hoop Summit, and I came away remarkably impressed with his athleticism and length. He got to the rim at will, looked to have solid mechanics on his jumper, and seemed to have really good poise with the ball, never forcing the action. I really liked him; I just need to see more of him.