On Wednesday, the Heat traded Joel Anthony and two future Draft picks to Boston. OPP examines whether Orlando might have made a similar trade.

Share All sharing options for: Orlando Pinstriped Post Mailbag no. 23: Was Boston's Joel Anthony trade an option for Magic?

Before we tackle the question in this installment of the Orlando Pinstriped Post Mailbag, I'd like to encourage you to submit your Orlando Magic questions for Tyler Lashbrook and I to answer in a future post. To do so, shoot an email to OPPMailbag@gmail.com or post on the OPP Facebook page.

Having reminded you of that outlet, let's get on to today's question.

A quick recap: on Wednesday, the Miami Heat dealt Anthony to the Boston Celtics as part of a three-team trade, receiving point guard Toney Douglas from the Golden State Warriors in return. Douglas' arrival in Miami is, however, incidental: the Heat realized luxury-tax savings by unloading Anthony's contract, which pays him $3.8 million in the 2014/15 season.

Boston agreed to take on Anthony because the Heat packaged two future Draft picks--the Philadelphia 76ers' lottery-protected first-rounder in 2015, plus Miami's own second-rounder in 2016--and, according to Brian Windhorst of ESPN.com, $1 million in cash with the veteran center.

To address the first part of your question, Jonathan, it's possible that Orlando could have played Boston's role in this trade by sending a low-priced expiring contract--like that of Price, Lamb, or Moore, as you suggest--to Miami for Anthony and those future picks. The second part, whether the Magic would have been interested in such a deal, is trickier. My guess is "no." 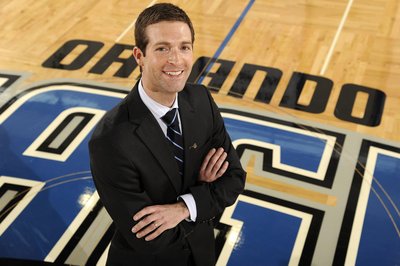 The Magic have several future Draft picks in their war chest. In a previous Mailbag, we examined them in depth.

Under the terms of the trade, Boston will get Philly's first-round Draft pick in 2015, but only if Philadelphia makes the playoffs that season. If the Sixers miss the playoffs, then they keep that first-rounder and Miami instead conveys two future second-rounders to Boston.

By making this deal, then, the Celtics have essentially bought two future picks for $2.8 million, or the cost of Anthony's salary less the cash the Heat sent them. The Sixers, even with Michael Carter-Williams, a healthy Nerlens Noel, and their 2014 lottery pick, aren't likely to make the playoffs in 2015, and one suspects that general manager Sam Hinkie will trade out of playoff position if the team threatens to contend for a postseason berth.

I don't think future second-round picks are worth the price Boston paid here. There's no telling if Orlando had the opportunity to take the Celtics' place on Wednesday, but even if it did, I think Rob Hennigan was wise to pass on the deal.