In one of the franchise's longest games, Orlando suffered a triple-overtime loss to the Bulls at Amway Center.

In a game that lasted three hours and nine minutes, the Orlando Magic fell to the Chicago Bulls in triple-overtime Wednesday, 128-125, despite fine performances from Victor Oladipo (a career-high 35 points, eight assists), Jameer Nelson (a season-high 31 points, 10 assists), and Tobias Harris (22 points, a season-high 16 boards).

Orlando led by as much as 15 points in the second half, but the Bulls' hot three-point shooting in the third and fourth quarters helped them force overtime. Tony Snell's long two-pointer with 48.6 seconds left in the third overtime proved to be the go-ahead basket, and Jimmy Butler added two free throws with 0.4 seconds to play for the final margin. Snell scored all 15 of his points in the fourth quarter and overtime periods, while Joakim Noah led the Bulls with 26 points and 19 boards.

The Magic took plenty of positives from Wednesday's defeat despite the fact that it was their ninth in a row. The circumstances of their previous losses dictated that reaction: Orlando lost its previous eight games by an average of 17 points apiece. On Wednesday, they showed a great deal of fight when they could have given up. Coach Jacque Vaughn came away pleased with his team's showing.

"We got better tonight." Jacque Vaughn

"We got better tonight," he said from the podium after the loss. "Last time we were in this situation going down the stretch, we didn't come out as victors. Tonight, same result, but a lot of good things along the way. A lot of positives along the way."

"I just think end-of-game execution [is one]," the second-year coach said. "Getting stops on demand when we needed them. Not giving in. Not relaxing. A lot of things that can carry over the next time we're in this situation."

A few key plays down the stretch against Chicago didn't go the Magic's way. With the score tied at 111 and 13.4 seconds to play in the first overtime, Orlando had the chance to win the game just before the buzzer. Instead, Noah switched onto Nelson on the left wing after a Glen Davis screen and the Magic's co-captain couldn't get off a shot before the horn sounded. One problem with that possession is that Nelson didn't use the screen until four seconds remained on the clock, not allowing himself enough time.

"It was my fault," Nelson said. "I knew they were gonna switch. I took the pick-and-roll too late. I told Glen, 'if I go too late, it's my fault.' I should have gave myself more time to make a play. Instead of going at five [seconds], I shoulda went at eight."

In the third overtime, Noah met Oladipo on consecutive drives to the basket, getting stops on both possessions. On the first, Oladipo lost the handle and Noah tied him up to force a jump ball, which contest the seven-footer won easily, setting up Snell's go-ahead bucket. On the second possession, he rejected an Oladipo layup and Butler recovered the rebound for the Bulls.

"He just made a good play on the ball the first time," Oladipo said. "And the second time, the ball slipped out of my hands. Credit him for playing great defense. I was just in attack mode."

The rookie guard drew inspiration from Nelson early in the game. "I just saw Jameer, actually, on the first couple possessions when he was attacking, how he was getting his shots off and being aggressive. I felt like I could do the same thing," he said. "I tried to basically imitate what he was doing."

Harris articulated the point that Orlando should learn from the loss to Chicago. "It just goes to show, like Coach has been preaching all year, to win games, all the little things count," he said. "Whether it be a missed rebound, a missed free throw, [or] a missed assignment defensively, all those things add up."

Playing with an edge

Harris' 16 boards Wednesday marked his highest total since he hauled in 19 against the Milwaukee Bucks on April 10th. And in the first quarter, he made a hustle play which helped set the tone for Orlando, diving on a loose ball and shuffling it to E'Twaun Moore for an easy score.

That assertiveness, Harris said, stemmed from a recent challenge Vaughn issued him.

"He got on me after the Denver game," Harris said, referencing Orlando's 26-point loss to the Denver Nuggets on Saturday. "He didn't think I played with an edge out there, so that [tonight] was just me going out for my teammates and for my coaches and just playing with the type of urgency and with the type of edge to show that I want to win."

In his year plus at the Magic's helm, Vaughn has developed a reputation as an even-tempered coach, so Harris' disclosure that Vaughn "got on" him recently came as a surprise.

"It's just like any other coach: he'll scream at you, cuss at you a couple times, but it's all love." Tobias Harris on Jacque Vaughn

"Me and Coach have that type of relationship where I've told him, and he knows, that if there's somebody on this team that he wants to scream at and use as an example, by all means, make me that guy," Harris said. The third-year forward added that Vaughn "got on" him in the Magic's loss to the Portland Trail Blazers on January 8th.

"It's just like any other coach: he'll scream at you, cuss at you a couple times, but it's all love because he knows I'm gonna go out there and give 100 percent effort. He wanted me going into the rest of the season, these games, to keep playing hard and keep being effective out there."

Counting Wednesday's result, Harris is averaging 12.6 points and 7.2 rebounds in 31.8 minutes, a far cry from the 17.3 points and 6.5 boards in 36.1 minutes he averaged in his first half-season with the Magic. In addition, his field-goal percentage has dropped from 45.3 percent to 42 percent. He has 43 games remaining to round into form and play with the sort of tenacity Vaughn demands of him. Wednesday's game was a solid first step toward reaching that level.

Magic swingman Arron Afflalo missed his third straight game Wednesday due to a sprained right foot, but his name nontheless came up in a pregame discussion with Bulls coach Tom Thibodeau. Might Orlando's leading scorer earn the first All-Star berth of his career?

Should Arron Afflalo start in the All-Star Game? 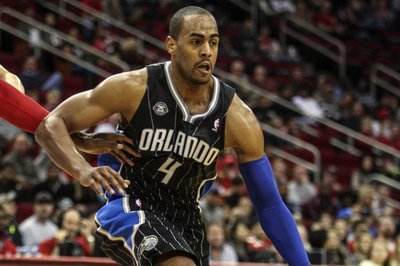 "You could certainly make a case for it," Thibodeau said. Chicago's coach praised Afflalo's ability to score "in a variety of ways," but also singled out the UCLA product's willingness to defend.

Thibodeau has seen firsthand how impressively Afflalo has played: on December 16th, he tallied a team-high 23 points, to go with eight rebounds and four assists, to lead Orlando in a one-point upset over the Bulls. On the season, he's averaging 20.8 points, 4.4 rebounds, and 3.9 assists. Though his raw per-game numbers impress, the fact that he plays for a losing club may hurt his chances of earning an All-Star spot.

Vaughn name-dropped Sir Winston Churchill, of all people, before Wednesday's game in response to a question about keeping players motivated during lean times. Orlando entered the showdown against Chicago on an eight-game losing streak.

"I really think it's a test of their courage," Vaughn said of the skid. "You remember Winston Churchill talking about that's the greatest of all the human qualities is having courage. Having courage to have the right mindset."

Vaughn is referring to when UK's former Prime Minister said, "Courage is rightly esteemed the first of human qualities... because it is the quality which guarantees all others."

Vaughn indicated that he's handling the situation well. "You don't have to worry about me," he said with a smile. "I'm good to go. I knew what I was signing up to."