With their two most efficient players sidelined with injuries, the Magic have struggled to create good shots. Who can fill the void?

The Orlando Magic's offense isn't pretty. That statement may not strike you as bold or particularly insightful--this is a team that finished the 2012/13 season with the league's fourth-worst offense, after all--but it's nonetheless true, and the team needs to find some answers before its season spirals much more out of control. Orlando has lost seven straight games, and in that stretch owns an offensive rating of 90.9, the worst in the league by 3.1 points per 100 possessions. To put that figure in perspective, the difference between Orlando's offense and the 29th-ranked Indiana Pacers' during that span is almost as great as the gulf between Indiana's and the 23rd-ranked Atlanta Hawks'. 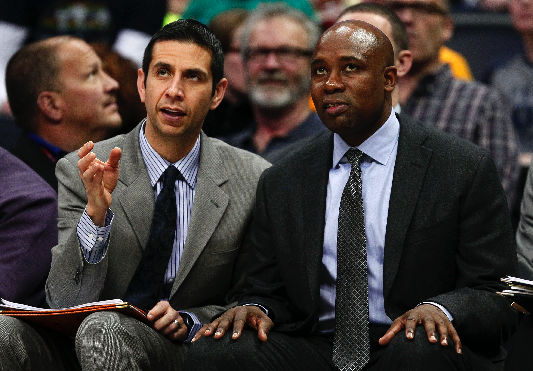 Here's how Orlando's offense has stacked up to the rest of the league--in traditional and advanced terms--during the Magic's seven-game losing streak.

Orlando's 26-point loss to the Denver Nuggets on Saturday highlighted the problems with its offense primarily because it played that game without Arron Afflalo and Nik Vučević. Those two players rank first and fourth on the Magic in scoring, respectively, but they also lead the team in True Shooting percentage. In their absence, the Magic struggled to create easy, open shot attempts, yes, but also faced another, larger issue: the shooting possessions that Afflalo and Vučević typically used went instead to less efficient players, who struggled to produce.

In other words, this offense needs a spark. The trouble is that, given the team's personnel, it's difficult to see who might provide it. Nonetheless, we have some possible solutions in mind.

The chart embedded below shows the Magic's shooting possessions--an estimate of how many possessions a player ends via a shot attempt or free throw, with foul shots weighted appropriately--on the horizontal axis against their True Shooting percentages on the vertical axis. At the risk of sounding obvious, the most efficient players would also, under ideal circumstances, take the most shots. That dynamic is not at play in Orlando. 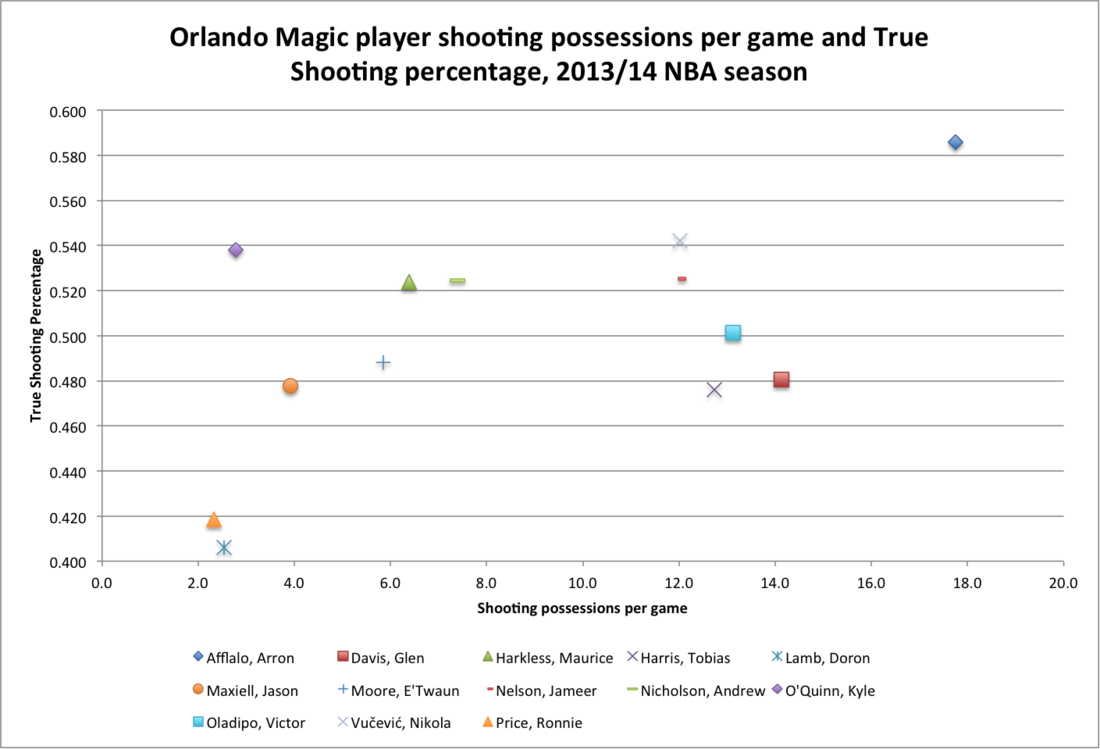 Afflalo, Vučević, and Kyle O'Quinn are the only Orlando players with True Shooting marks above the league average of 53.5 percent. Glen Davis, Victor Oladipo, and Tobias Harris--the three Magic players who use the most shooting possessions after Afflalo--all have True Shooting percentages at or below 50.1 percent. Whenever Afflalo or Vučević misses time, as each did Saturday, then those three have to take on even more responsibility than usual. That level of responsibility does not necessarily correspond with their skill levels.

One path to improvement: playing Andrew Nicholson and Maurice Harkless more minutes. Though neither player rates above-average in terms of efficiency, each is at least close enough to average that expanding their roles shouldn't harm Orlando's offense. Nicholson is coming off a rookie season in which he averaged nearly a point every two minutes on 55.7 percent True Shooting; certainly he merits more shooting possessions than the 7.4 per game he's getting at present.

And while Harkless, with a career three-point conversion rate of 30.1 percent, is no one's idea of a floor spacer, he at least takes good shots: nearly three-quarters of his shot attempts come from the corner three-point zones or within the restricted circle, according to NBA.com's stats page. That's a great shot mix for a role-playing forward.

There's more to improving Orlando's offense than simply reallocating possessions. The team must also get more defensive stops. Defense and offense feed into one another, and by forcing misses or turnovers, the Magic can get out in transition and play against defenses that have yet to set themselves. Every team looks to exploit mismatches off stops, but Orlando is particular in wanting to do so. When the Magic have to take the ball out of their own net and play against a locked-in defensive unit, their task becomes significantly more difficult; the Magic's players will be the first people to tell you they don't have an overwhelmingly talented one-on-one scorer, and without such a player, the team's offensive success is inexorably linked to its ability to get out in transition off stops or, failing that, to execute in the half-court.

Another way to level the field, so to speak, is to hurl oneself at the basket in the hopes of drawing contact. This skill is perhaps Oladipo's strongest at the offensive end. Though the Magic rookie struggles with his shooting--itself a function of iffy shot selection--he's nonetheless demonstrated aptitude at drawing fouls on his forays into the painted area. If he exchanged a handful of his long twos off the bounce for more head-down drives, the Magic could reap the rewards at the stripe.

The same holds true for all of Orlando's players, and in this way they'd be wise to follow the rookie's example. Harris is a particular candidate for this adjustment, as he's shown glimpses of playing this style in the past: in his 27 games with the Magic in the 2012/13 season, the Tennessee product averaged 4.1 free-throw tries per game. His rate of free-throw attempts per field-goal try has improved in his first full season in pinstripes, but he's taking fewer foul shots per game overall because he's playing a more complementary role alongside Davis, Nelson, and Afflalo, with whom he previously played sparingly. One wonders if featuring him off the bench in a go-to scoring role might better suit his skills, though such a tactic is likely not an option with Vučević sidelined and Davis having to shift to center in response.

The nature of Orlando's roster limits what coach Jacque Vaughn can do to address his team's ailing offense. But he does have some choices; even without Afflalo's versatility and Vučević's putbacks and occasional 18-footers, this team shouldn't look as sickly as it does on that end of the floor.